The Sound of Pentecost 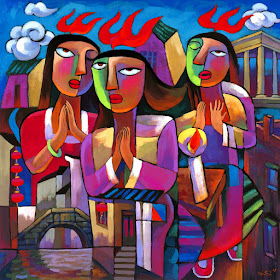 This is my column which appeared in The Arab Tribune on May 27, 2015. A very similar version of my story appeared in my column of the Faith and Values Section of The Huntsville Times on August 8, 2008.

Pentecost is one of those lesser-known holidays that doesn't get the attention of Christmas and Easter, but it ought to be a huge day if you think about it. The Church was born. People were gathered from all over the place, assembling in Jerusalem for one of the big harvest festivals.

There was a big "whoosh", like the sound of a violent wind, and tongues of fire came down. But even with all that earth, wind, and fire, what really got everyone's attention was that language barriers melted away, and everyone could hear the God-talk in their own tongue.

Have you had a Pentecost experience? I don't mean something quite so dramatic as what happened that day. Have you had one of those moments of clarity when all things converged, and there was some kind of "whoosh" that took you to an entirely new barrier-breaking place?

Years ago, I heard music that would change my life. I was twenty years old, traveling to the People's Republic of China on a mission and study tour with Christian young people from north Alabama. One Sunday, we visited a Protestant Church in Nanjing.

I was not entirely looking forward to it. The trip had been tiring, and morning seemed to come early. We had heard that we should expect the sermon to be at least forty-five minutes long, and of course it was in Chinese.

When we arrived, they had reserved space for us near the front. It was a good thing, too, for the room was absolutely full. I remember the beautiful face of an old woman with tattered clothes who sat right in front of me. She smiled at me warmly, and we nodded at one another.

We settled into our seats as the service began, and though I was not expecting much because of the language barrier, I found myself completely taken away. From the moment I heard the first note of music, my spirit was captured by a world of connecting that was beyond words.

We began by singing “Holy, Holy, Holy” in Chinese. I knew only one verse in English, but I sang it over and over just the same. I had never heard anything like the unique blend of voices in different languages singing as one. Throughout the service, I found every note strangely familiar.

The choir sang John Steiner’s “God So Loved the World,” in beautiful Chinese intonation. A shock wave moved through my spirit, for the choir of my home church had done the very same piece two weeks earlier. I knew the beloved words to John 3:16, and so did they.

During the sermon (which was indeed over forty-five minutes and in Chinese), I found myself intrigued by the songbook. Instead of the Western hymnal I was used to, it was simply Chinese words with numbers printed above them. I can remember the moment it dawned on me how the numbers represented the tune. With a number for each note in ascending scale, “Jesus Loves Me,” for example, was notated “5-3-3-2-3-5-5.”

Once I saw this, I searched from hymn to hymn to find tunes of my faith inside this book on the other side of the world. The magnitude of our connectedness filled my soul. The sermon was over and we sang again. By this time my heart was racing and my voice bellowed with whatever verse or phrase I could remember.

I will never forget the face of the old woman sitting in front of me. Toward the end of the song, she turned and looked at me with tears streaming down her face. When her eyes met mine, it was my “Pentecost moment”. It was a profound experience when I realized that though we were separated by a world of culture, we could hear each other in our own language. She and I were brother and sister, and we knew it deep in our bones.

There is strangely familiar music that binds us together, spanning the globe and moving through the centuries. It's our corporate song, for our spiritual lives do not develop in a vacuum. Our journey has context.

When I came out of that crowded church in Nanjing, I had seen a glimpse of God’s dream for humanity, a people wonderfully diverse but forever bound by the song of our hearts.

Steve West is a husband, father, minister, musician, and writer who pastors Arab First United Methodist Church. His blog, "Musings of a Musical Preacher," may be found atwww.stevewestsmusings.blogspot.com.
musicalpreacher at Thursday, May 28, 2015
‹
›
Home
View web version