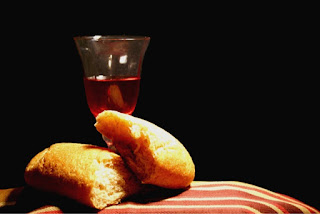 This is my devotional, shared at the North Alabama Conference Board of Ordained Ministry Meeting on August 11, 2016.

"Do this in remembrance of me."

I have no idea how many times I have uttered these words.

Anamnesis, the New Testament Greek word translated "remembrance", is one of most important words pastors say, recalling the words of Jesus according to 1 Corinthians and Luke.

Long before the New Testament was written, it was a common word in Platonic philosophy. Socrates (Plato's teacher) believed we are reincarnated souls who carry memories across generations, though the trauma of birth makes you forget. So learning, for Plato, is remembering what you already have inside you. Asking questions accesses that inner knowledge. That's Plato's doctrine of anamnesis.

I like the translation "recollection" better than "remembrance", for we are not so tempted to reduce it to cerebral exercise of recalling facts. Communion is not a memorial, nor is it a funeral for Jesus. It is not an object lesson or a teaching tool to convey a principal about sin and forgiveness.

We "re-collect." We recollect our deep memory of the table at which Jesus transformed living memory itself, reshaping the story of deliverance of Israel into one of drawing the world to his own heart. The Great Thanksgiving is a great recollection.

Anamnesis is our hope, because that's how we recollect ourselves, too. We collect ourselves from all corners of the earth, in all our brokenness, to this one place, which is timeless truth fused into one moment in which we can "taste and see" the goodness of the Lord.

Why is it important? We need anamnesis because we get amnesia.

I am a fan of Richard Rohr, because he speaks an uncomfortable truth. We are consumed by the myth of the "us and them" and are so very prone to dualistic thinking. We live in a world of divisive politics, a new level of schism in the Church, and competing phrases such as "black lives matter, all lives matter," and "blue lives matter," as if theses are somehow mutually exclusive.

Anamnesis, or holy recollection, is not just about reclaiming the past. It means that in times of forgetting who we are, unity comes from above not from below.

We will never be able to create unity amongst ourselves. It is a gift given.

"Steve, I don't care what you call it. This is my church."

It gave me hope to share Christ freely, no matter what.

We live in times of great uncertainty in our denomination. Yet we are servants swimming in the greater movements of history we can't control.

So swim, and swim with joy. Let's recollect ourselves around what means to be the body of Christ, redeemed by his blood.
Posted by musicalpreacher at Thursday, August 11, 2016 Links to this post