Meditation on a Shooting Star 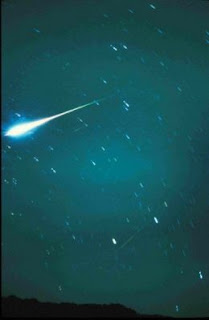 Every once in a while, I talk to my mother. That may not seem strange to you unless you knew she died about seven years ago. I just feel like talking to her, and know with every fiber of my Christian faith that she can hear me. Sometimes I can almost feel it. Years ago at the communion table, when I was walking back up the steps from serving the congregation, in my mind's eye I saw, in a flash, a vast choir gathered around the table. Mom was there smiling at me. In my meditations, I always think of this as my "Hebrews 11 & 12" moment.
This week, I was walking and praying in my neighborhood. I was struggling with a difficult and emotional situation and felt led to talk it out a bit with Mom as my way of praying. I remember asking for her to show me wisdom from her heavenly perspective.
Suddenly, I saw a shooting star. It was a long one that lasted about two seconds. It was bright and burning, then it was gone. It seemed so quiet, so gentle in its presence though I know the scientific reality of hotly burning gases and minerals.
You might call it coincidence or call it "God incidence", and maybe the gift is the heightened sensitivity I was given to notice. But it gave me a sense of hope. All that might seem like it's brightly burning right now will soon pass, and somehow, the sight of it is beautifies the skies of the earth.
Thanks, Mom.
Posted by musicalpreacher at Monday, February 28, 2011 Links to this post

A Spirituality of Grief 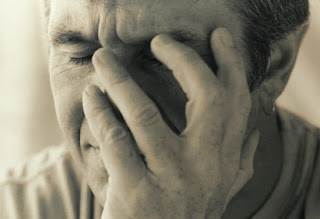 I recently found an obituary written by my 4th Great Grandfather, Rev. Levi Garrison. I am touched by the spirituality deeply embedded in the grief of a father who lost his son. It also sheds light on early American Methodist spirituality. It is from the archives of Wofford College in SC and was published in the Southern Christian Advocate on Nov. 27, 1840. I hope it blesses you.
Dear brother, I have often in the pulpit, as well as out of it, expressed my thanks to God for giving me twelve children, nine of whom were in the church, and all of them living and helping each other on in the Lord's work. But this matter of religious exultation is now changed with me in one respect. On Monday last, the 2d inst. the mighty destroyer, with full commission, passed by, and sternly demanded my eldest son, OSBORN, who resigned up his life with the greatest assurance, bidding us all farewell with his soul full of faith and love, shouting the praises of God as long as he could be heard to articulate a word. And when his speech failed, and I told him in the midst of a large company of spectators, if his soul was happy to press my hand, and held it to him, he immediately grasped it with both of his hands, and held it up. The persons present pressed toward to see, and he held it until all had seen, and immediately the power of God rested on the assembly; some fell to the floor, and others shouted aloud the praises of God. Oh, it was such a time of rejoicing to me; I do feel so thankful to my Maker, that even whilst I am now writing, my soul longs to depart and be with Jesus, and my dear son.
For the information of his numerous friends and connections in different parts of the country, I will only add OSBORN B. GARRISON was born in the State of Georgia, Oct. 23, 1812, and brought up in Anderson District, S.C. He embraced religion at a camp meeting held at Sandy Springs, Sept. 21, 1827, and joined the Methodist E. Church at the same meeting. He was one amongst the most pious and uniform young men in the department; faithful to his duties, and temperate and good in all his walk and conversation. He died as he lived, beloved by all who knew him. He was bitten by a spider, about two years ago, on the inside of the knee, and suffered great pain for some days after. He afterwards took cold before the poison was fully extracted, and it fell upon his whole system, bringing on a lingering disease which wore him down to a skeleton, and finally closed the mortal scene on the second day of this month. He was followed by a large company of people the next day to his burying, where he was interred amidst many tears and lamentations. Rest there, my beloved son, until the trumpet of God shall awake thee again from thy sweet repose, to come forth in the resurrection of the just, who, like thyself, "chose rather to suffer affliction with the people of God, than to enjoy the pleasures of sin for a season."
Levi Garrison
Anderson Dist., S.C., Nov. 5, 1840 Will the South-Western Christian Advocate please to copy.
Posted by musicalpreacher at Tuesday, February 22, 2011 Links to this post

My Liturgy to be Published in "Worship & Song: for United Methodists"

I have just heard that a liturgical prayer I wrote will be published in the Worship Resources Edition of Worship & Song: for United Methodists. This new resource will be available in several editions, the Music Edition coming out first. The Worship Resources edition will come next year and contain services, acts of worship, and other resources.
I wrote the text for use on Easter Sunday for the lighting of the Easter Candle during the opening hymn. I suggest singing four verses of "Christ the Lord is Risen Today," then using the liturgy, then singing the last two verses. I adapted it from ancient texts for lighting the candle at the beginning of the Easter Vigil. Here it is:
THE RISEN SAVIOR SHINES UPON YOU

The risen Savior shines upon you!
Let this place resound with joy,
echoing the mighty song of all God's people!

The Lord be with you.
And also with you.
Lift up your hearts.
We lift them up to the Lord.
Let us give thanks to the Lord our God.
It is right to give our thanks and praise.

It is indeed right
that with open hearts, clear minds, and exuberant voices
we should praise you, unseen God, creator of all that is,
and your only Son, Jesus Christ our Lord,
who has ransomed us by his death,
and has risen triumphant from the grave.

Therefore, in the joy of this blessed morning,
when sin is washed away
and mourning is turned to joy,
accept our sacrifice of praise.
Grant that this Easter candle make our darkness light,
for Christ the morning star has risen, never again to set,
and is alive and reigns for ever and ever. AMEN
To be used with the lighting of the Easter (Paschal) candle on Easter morning. May be inserted after verse four of the hymn "Christ the Lord is Risen Today."

A Contemplative Vision of Light 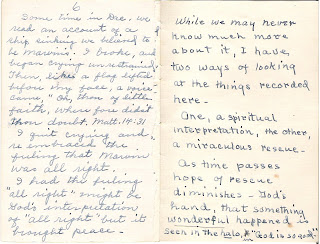 Last week, I posted my grandmother's beautiful "prayer in color" and mentioned that it came to her during one of the darkest times in her life. I know this to be true because of the papers it was found with.
My Uncle Marvin was killed during World War II. He was in the navy, on a tanker in the Atlantic which was torpedoed in 1942. According to the best evidence recovered, he jumped off the ship after the explosion and drowned. In the family papers, you can see a spiritual and emotional progression - a worried letter asking him why he is not writing more often, a notification that his ship had been lost at sea, continued communication leaving the family hanging, desperate letters asking for information or belongings, the consoling letter of a survivor about what had happened, and finally an announcement one year later that Marvin had been declared dead.
My grandmother had some contemplative and mystical experiences during this time that are part of the fabric of my own spirituality. As I read through these bits of lingering grief, I can feel the agony a mother must have felt over her lost son. But I am struck by her faith. She writes of her spiritual exploration during this time of darkness.
She writes in her journal "This is the record of the peculiar and supernatural things, and impulses connected with our sorrow, and the disaster of the Fall of "42." She recalls a burning impulse to lay hands on his head and pray blessings on him the last time she saw him and her regret at not following the impulse. She relayed the experience of taking him to the bus station, and her husband saying "that may be the last time we'll ever see him," and her resistance to feeling that way. She talked of her husband's depressing resistance to going to Annual Conference in October of 1942, when Marvin had died but they didn't know it yet. She ended with the experience of peace and the sense that "God is so good" even while they awaited confirmation for many months. As she wrote these things in her journal, she still had hope that somehow he might be all right.
The one that caught my attention the most was a dream she had soon after they saw Marvin last. She saw a convoy wrecked and felt all the shock and horror that she felt when later she "received the fatal telegram Nov. 19." In the dream, she felt a peaceful calm, and saw a light or halo which settled, framing the face of one of her boys. She awoke and called her husband, feeling the dream was some sort of warning or message.
Granny was not the first person in history to have a mystical experience of light shining in the darkness. I have often wondered why this image has always been so powerful for me in my prayer time. I think now I've discovered why.
Posted by musicalpreacher at Tuesday, February 08, 2011 Links to this post

Prayers Under the Floorboard 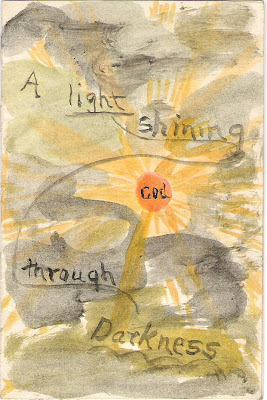 (pictured is my grandmother's "prayer in color")
Jan L. Richardson writes of a Cistercian monastery in Lower Saxony, Germany. A team restoring the sanctuary ran across a treasury of prayer underneath the bulding. It held a number of objects including old eyeglasses and thimbles, but also held the prayerbooks of nuns from some 500 years ago. Each was distinctive to the woman who used it, created for personal prayer outside the formal liturgies of the hours. It traced the spiritual longings of women seeking Christ in the midst of the religious turmoil of the Protestant Reformation. These prayer books that emerged from beneath the floorboards offer a unique glimpse into the hearts of those that used them.
I wonder, what is underneath the floorboard in hidden places in your life? What prayerfulness of the past could give you power for the present? I, too, believe there are prayers that run through our blood and through our ancestral memory. In a very real sense, the essence of spirituality is uncovering our prayer life rather than coming up with one.
This picture of light was found in the papers of my grandmother, Louie Ann Williams Hamby, who died when I was 6 years old. It accompanied some of her prayer notes during what must have been the darkest time in her life. It is nice to see that "praying in color" is not a new idea. I will post reflections on the accompanying notes later.
For now, I meet God as I gaze at what was found "under the floorboard."
Posted by musicalpreacher at Tuesday, February 01, 2011 Links to this post