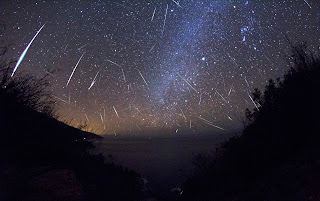 This is my column which appeared in the Dec. 14, 2016 issue of The Arab Tribune.

I was astounded by the bright, swirling bits of fire expanding in a quiet, seemingly random pattern. My mind desperately rushed to focus on them before they were gone. But there were too many to focus on.

Light was blazing and quickly falling. I wondered how something so random could descend with such grace, tracing patterns of light in the darkness. I had never seen such dangerous energy, such striking beauty, in the night sky.

It made an imprint on my mind and drew my imagination toward bigger things. The universe is indeed a majestic place.

No, I'm not describing the fireworks I saw on the 4th of July. A couple of weeks ago, I happened to be gazing into the night sky when I saw a full meteor shower. I can count on two fingers the number of times I've send a "shooting star", but this was different.

I know a little of the science of it. Every year in November, the earth passes though debris from a comet. Pieces of that comet, which can be as small as a pea, hit the atmosphere and fall toward the surface. The air resistance causes the crumbs to ignite into burning balls of fire.

But this is the first time I had my head up and saw the show. If I hadn't been looking, I wouldn't have seen it. It was intense, but it was short and sweet. To my eyes, it appeared as if one larger meteor entered the atmosphere and promptly broke up into numerous pieces. The pieces just whirled in the air.

I have heard of these meteor showers. But I had no idea that seeing one would take my breath away. It happened fast, and it sure looked furious. And then, in a few moments, it was gone.

Most people in the world didn't see it. But they could have if they had been focused on the sky at just the right moment. I wonder how many times in my life things that have seemed big and powerful at the time have fizzled away after their momentary madness. And the rest of the world scarcely noticed.

Some of the things that bother me just blaze and burn in this expanse we call "now," but they grow cold and dark given a little time. Someone spreads a false rumor and it stings. Or I respond as gracefully as I can to a disgruntled parishioner. Or I fail to achieve a goal that I had my heart set on. I get caught up in a misunderstanding. Or I feel blue about something I see on the news. Or I make it through a most troublesome and divisive election season (sound familiar?).

Whatever it is usually seems pretty huge. The strange thing about a meteor shower is that since we have a look from a distant enough perspective, there is a quiet beauty in the burning. And yet no matter how bright it is, soon it will be gone.

Most everything that bothers me is temporary. It is the things of virtue that are lasting, and there is a strange power in the fizzling away of the fleeting.

I often say that if I have my integrity, nothing else matters. I have had lots of challenges, but in regards to my faith, the only thing that ultimately matters is love. So I try my best to live a life that lends itself to passion for my God and my neighbor.

I admit that sometimes I keep replaying difficult experiences in my mind. I've heard it said that you can't move on to the next chapter in life if you keep re-reading the last one.

Perhaps something about that meteor shower changed me. Next time I gaze at the stars, admiring the expanse of the universe, I will try to take notice of the eternal things, the beautiful things, the unseen things. Not just the dazzling lights that I might chance to see. They catch my eye and monopolize my attention. But they, too, shall pass.

There is a greater majesty lying deeply behind the flashes of light. So I will try not to get so caught up in what I can't really control. I will give myself to love, and love will see me through.

After all, love is the transcending mystery that binds the universe together and brings patterns of grace to all that burns.

I am tired of living for the blaze of glory. I suppose I am beginning to long for the greater perspective. How about you?

Steve West is a husband, father, minister, musician, and writer who pastors Arab First United Methodist Church. His blog, "Musings of a Musical Preacher," is at www.stevewestsmusings.blogspot.com.
Posted by musicalpreacher at Wednesday, December 14, 2016 Links to this post