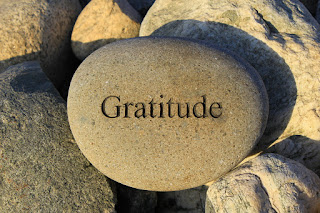 This is my column which appeared in The Arab Tribune on Wednesday, November 27, 2019.

I was appointed to pastor my first church at the ripe old age of 24.

Sandy and I had only been married for a year, and this was the first time we had gotten out of an apartment and set up house. We couldn’t wait to get started.

We moved into the modest little home next to our church in Fyffe, Alabama and the journey began. After setting up our new post office box, I started to check the mail every day. But only one letter stands out in my memory from that whole first year in our home.

When I think of that letter, it takes me back. I visualize the whole setting, including the extra wide sidewalk in front of the post office.

What was this singular letter? It was what I now call a “random act of gratitude.”

The handwritten letter was from Rev. John Rutland, who was many years my elder, a retired pastor in North Alabama.

He knew my family well, but he was mostly the stuff of legends to me. He had taken a progressive stand during the civil rights era when that wasn’t so popular in Alabama. He had stood toe to toe with his own parishioner, the infamous Bull Connor of Birmingham, and had worked hard to integrate the Annual Conference of the Church. I’d heard stories of his contentious relationship with Governor George Wallace over issues of segregation. And he was an incredibly loving man.

I couldn’t imagine why such a prominent figure in ministry would write a note to little old me. But I can still remember how the scribbled black ink flowed on the creme colored personalized stationary. He wasn’t being a legendary figure that day. He was all pastor.

He told me how proud he was of me, how much he loved my family, and how thankful he was that I was starting out in ministry. He described how every November, he made a list of 30 people he was thankful for and wrote one every day. He said today was my day. The card stock stationary just oozed with gratitude.

You’ve heard of random acts of violence, and maybe you’ve heard of the movement to counteract them with random acts of kindness. Whenever I ponder the idea of random acts of gratitude, I think back to John Rutland’s letter. It has stuck in my mind all these years because it was a completely unexpected and serendipitous expression of the quality of being thankful. I found it incredibly encouraging as a young pastor.

Perhaps the latter part of November, at least, could lead you to perform some random acts of gratitude.

Go out of your way to express your thanks. Share a word of appreciation in a way that’s unexpected, if not wild and crazy. Make thanksgiving not only something you give to God but something that spills over onto everyone else. Let gratitude be way more boundless than the obligatory annual family prayer over turkey and dressing. Let it be a daily attitude, not confined to a holiday but something that makes every day a little more holy for someone.

Steve West is a husband, father, minister, musician, and writer that pastors Arab First United Methodist Church. His blog, “Musings of a Musical Preacher,” is found at www.stevewestsmusings.blogspot.com.
Posted by musicalpreacher at Tuesday, November 19, 2019 Links to this post

Thanksgiving Blessing from “The Fonz”

“I live by two words, gratitude and tenacity. Tenacity gets me where I want to go, and gratitude does not allow me to be angry along the way.” - Henry Winkler
Happy Thanksgiving!
Posted by musicalpreacher at Monday, November 18, 2019 Links to this post

A Thought from Kahlil Gibran

This thought resonates with me today from Kahlil Gibran.
“Speak to my soul, oh Lord. May it continue to unfold itself unhindered. May the treasure you have placed in me be revealed to my eyes. My ears indeed thirst for my heart’s knowledge.”
This is what draws me to the table in my studies, because it gets at the heart of me, and the heart if the matter, in ways beyond words.

Posted by musicalpreacher at Monday, November 18, 2019 Links to this post

“As a Christian, when confronted by a tension between a religious certainty which leads me to violate the law of love and a deep unknowing that still moves in the direction of ‘loving my neighbor as myself,’ I am bound to choose the latter course.”
Cynthia Bourgeault
Posted by musicalpreacher at Friday, November 15, 2019 Links to this post