Searching for hope amid our dark night of the soul 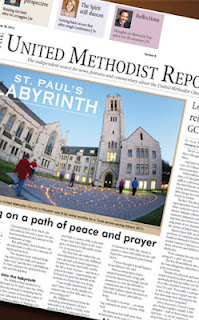 This is my column which was published on June 14, 2012 in The United Methodist Reporter.


You might prefer to read it in The United Methodist Reporter.

Some United Methodist leaders have been gloomy in recent weeks. They feel that General Conference, the massive every-four-year gathering of denominational leaders, failed to produce change.

There was, in the works, a dramatic overhaul of the agency structure, aimed at downsizing and simplifying. Many feel the present system of agencies is too expensive and top heavy for a declining membership, and less and less relevant to the mission of local churches and average members. I agree.

But in a late ruling by the Judicial Council, a compromise reorganization plan that passed General Conference was deemed unconstitutional. One delegate told me that I couldn’t imagine how disillusioning it was to work so hard and then be told on the last day that all would be undone. He added, “You might as well just take a 2012 sticker and put it on your 2008 Discipline. Why buy a new one?”

I hope that disappointment will be redemptive, leading us to do a better job of working things through next time. Perhaps it simply wasn’t time yet for major change, and the meeting was part of a larger overarching journey. Sometimes in our history it has taken two or three General Conferences to do something of major proportions. I have been interested in monitoring online responses, some of which have been highly anxious, offering unhealthy blame and finger pointing. Some doomsayers say the church is headed toward a colossal dismantling.

I passionately believe in Wesleyan spirituality and see God’s Spirit moving everywhere in our church. I love and serve with my whole heart, but you must know that I don’t think of General Conference as the definition of “church.” The church is where two or three or are gathered in his name, where the Holy Spirit is alive and Christ is present.

I don’t believe that in this period of institutional decline, we can hold onto life as we know it. If certain aspects of our institution fall apart, that’s OK.

I have seen several articles and open letters after General Conference expressing the frustration of leaders in a system riddled with institutional anxiety. But the one that resonates with my soul is “We need ‘call to holiness’ more than Call to Action” by Sarah S. Howell (see Reporter, April 13).

With Sarah, I believe that we are experiencing a dark night of the soul. That’s not a bad thing. It just is, and like mid-life crisis or grief, it’s something we have to go through to find our hope, to be made new, and get to the place God would call us to be. It can’t be avoided or escaped, as much as we’d like to try.

The language of the dark night of the soul comes from deep in our spiritual heritage. It is a place that feels a void of God’s presence, yet it is pregnant with meaning as we let go of things we have held onto. For the denomination, it’s been a long 40-year night. But the problem is not unique to the United Methodist Church. This dark night is part of the larger, overarching decline of American Protestantism.

Proponents of our anxious efforts to keep the institutions propped up sometimes lack the wisdom of seeing the larger picture of where we are spiritually and what God might be doing during this time of the dark night.

Perhaps most of us can’t see past our own favorite issue, which we think is going to fix the problem. So we work, work and work harder to change the system. Some of the changes are good, but may not address the larger issues of relevance in contemporary culture. The idea that working harder will turn the church around is a new form of works righteousness.

There is no way around this dark night with a flashlight, and there is no one thing that we can do to fix it. Some UMC leaders get caught in a tailspin of anxiety, working diligently for a solution; but the reason we are declining in number is the same reason that ALL mainline denominations in America are declining.

It’s not an institutional issue that institutional reform will fix. It’s a spiritual issue. We need to plunge into a new mystery, a revolutionary revival. And it appears a cross will precede the resurrection. That’s our story, isn’t it?

On the local level as well as the global level I see the Spirit at work in amazing ways. Our membership is growing like crazy in Africa. We each have a candle to light in our corner of the world, and I see vibrant and wonderful things going on in the local church. Let’s keep the Spirit alive as we bloom where we are planted, knowing there is a disconnection between the institution and the local church.

I’m not sure how long this dark night of the soul of American Protestantism will last or where it will lead, but I find hope in the language of the dark night. One thing I’m certain of. Working harder doing what we’re doing won’t turn institutional decline around.

The only uniquely Christian understanding of transformation is that it involves a cross and a resurrection, and you can’t work hard to create a resurrection. I’m afraid of what taking up the cross might mean for our beloved institutions, but I know that when a cross happens, God is in it. And something new and beautiful will emerge, even if it hurts.


The Rev. Steve West is senior pastor of Saint Mark UMC in Birmingham, Ala.
Posted by musicalpreacher at Saturday, June 16, 2012