There are a number of resurrection appearances in the scriptures. They have dramatically different details, as if the apostles in their extreme excitement reported this awesome set of events using their own unique set of spectacles. For me, noticing honestly the differences is not a matter of contradiction at all. It gives me an even higher reverence for the truth of the scriptural witness that the early church didn't see the need to fix variances in the stories passed down.
A wonderful way to celebrate the season of Easter, to integrate the joy of the resurrection into everyday life, and to take the victory of life over death into the coming year is to live with these stories. Ultimately, I know that my redeemer lives not only because of the stories themselves but because I have experienced the power and presence of the risen Christ in my own life.
I encourage you to spend time with them. I have made a list of the resurrection appearances in the Bible with a few notes on the details. I hope it helps you encounter the risen Christ this season.
The Resurrection Appearances of Jesus

Mk 16:1-8 (stone rolled away, man in white inside tomb, go and tell, alternative ending with summary of additional appearances 9-13)

Lk 24:1-13 (two men in dazzling clothes inside, why look for living among dead, Peter ran to the tomb to check)

Jn 20:19-29 (peace with you, showed hands and side, Thomas wasn’t there, a week later he appeared to Thomas)

Jn 21:1-25 (disciples back to fishing, miracle of fish, Jesus cooked breakfast, “feed my sheep”, false rumor about John never dying, world could not contain the books)

The Final Word to Share the Story in all the World …

Acts 1:1-11 (summary of many appearances over 40 days, you shall receive power and be my witnesses, the ascension) 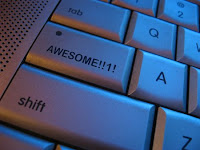 I am often entertained, and sometimes quite moved, by the things children say. During worship this morning at Grace, we celebrated the Eucharist as we continued Easter joy. A mom told me that after the cup was offered to her son with the customary words, "the blood of Christ shed for you," he responded with a bright smile exclaiming "Awesome!" After he received, he turned and high fived somebody.

It was. And it is. It's awesome indeed. I wonder how many of us adults are so used to communion, so used to ritual, so used to church, and so used to Easter that we develop a selective amnesia, not so much about the meaning but about the power. It's awesome all right. It's electrifying. That cup should send us into a spine tingling frenzy of joy, because it's our cup of redemption.

I know one child who truly worshipped today.

"The do it yourself, self-help culture of North America has so thoroughly permeated our imagination that we ordinarily don't give attention to the biggest thing of all -- resurrection. And the reason we don't is because resurrection isn't something we can use or control or manipulate or improve on." - Eugene Peterson, "Living the Resurrection"
Posted by Steve West at Sunday, April 11, 2010

Jesus, our Cup of Redemption 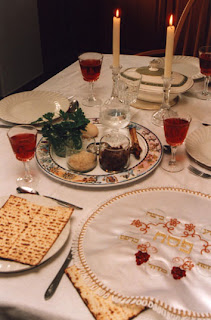 A child asks, "Why is this night different than all other nights?" Then the story is told with both narrative and symbol. It is a story of God's action to free the Hebrew people from slavery. This is the Seder. Celebrating Passover is a fun-filled, family-friendly worship experience at the table.
Last night was Maundy Thursday, the night this happened. The Grace UMC family gathered to experience communion in its most original context, just as Jesus and the disciples did as faithful Jews. A night rich with symbol and story, it was the night Jesus instituted Holy Communion. Our experience of the Eucharist will never be the same. He is the new Moses, the one who has come to free us from our self-inflicted slavery of sin.
During the night, four cups of wine are drunk (no wonder this is such a festive experience!). Though we used grape juice, we shared about what each cup means. The first is the cup of thanksgiving, and the second is the cup of remembering the plagues. The third is the cup of redemption, shared just after the meal. The fourth is the cup of Hallel, or praise.
Jesus chose the third cup to radically change tradition and to bring a whole new meaning to redemption. In Jewish Seder tradition, the Afikomen (the bread that had been set aside and hidden for after the meal) is eaten, the cup of redemption is poured, and an extra cup is poured at Elijah's place. It is hoped that Elijah would come and announce the Messiah. The door is opened by a child and everyone stands in hopes that he might come in.
But Jesus changed this. His words must have stood in stark contrast to the words these faithful Jews had heard time and again at this moment in the evening. The scripture says that "after supper, Jesus took the bread." He shared the Afikomen but called it his body, broken for us. Then it says, "likewise after supper, Jesus took the cup." He gave thanks and gave the one cup to all of them, rather than pouring individual cups of redemption, including one for Elijah, the usual way. He gave thanks, and gave them the one cup to share, saying "drink from this all of you ... this is my blood of the new covenant."
Hiddenness had been revealed and redemption was coming through the gift of his own body and blood. There was no reason to pour the cup of Elijah since the Messiah had come. Jesus did not finish the Seder rituals and the fourth cup of praise. Instead, he said "I will not drink of the fruit of the vine again until I come into my kingdom."
This holy weekend, let us remember that what he symolized that night became a reality as he gave his own body and blood for you and for me. Then he rose again in victory, releasing us from the slavery of sin.
What enslaves you? What depth of sin, painful memories, relational brokenness, or self-inflicted trauma? Jesus is our cup of redemption. Communion with him sets us free.
Posted by Steve West at Friday, April 02, 2010