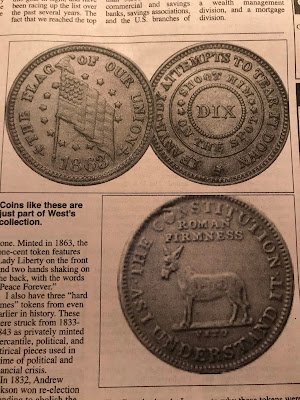 This is my column which was published in The Arab Tribune on Wednesday, October 23, 2019. The photo of tokens identical to the ones in my collection appeared with the article in the paper.

My Dad is eighty-seven years old, and he tells me he’s never seen anything quite like it. As an amateur student of human history, I’m pretty sure we live in distinctively divisive times.

Rarely does a day go by without media mention that we are a “divided nation,” but it’s not just about politics. It’s about race. It’s about religion. It’s about sexuality. It’s about our present-day propensity toward “us and them” thinking, leaving moderates having a tough time helping us all meet in the middle. But here’s the thing. It’s not the first time, and it won’t be the last. What can we learn from our own American story that will help us through these crazy times?

Since I’m a pastor by trade, most people are surprised to hear I collect coins. I find it fascinating. It’s like carving a slice of historical pie and having a taste.

Steel pennies point to the economics of war. Large cents and half cents remind you that inflation is a big deal over time. Two and three cent pieces show you some ideas just don’t last. Endless incarnations of Lady Liberty during the first half of American history, including the Indian Head penny (yes, that’s her in the headdress) and the Mercury dime (no, she’s not the Roman goddess everybody thinks she is), remind you of the values of a flourishing new nation. The choices of presidents on coins tell a story, starting with Lincoln, the first one who made the cut, on his 100th birthday in 1909.

But a few years ago, I cut into a new slice of history. I got hold of some Civil War tokens and Hard Times tokens. And they’ve given me insight that puts our divisive times into a grander perspective.

Civil War tokens were made between 1861 and 1864 because of the lack of government-issued cents. Coins were being hoarded, and merchants turned to private mints. By 1864, there were over 7,000 varieties, from patriotic tokens, to store tokens, to “sutler” tokens (bearing the name of an army unit). They did not became illegal until after Congress passed laws in 1864 prohibiting private coinage.

I have three in my collection, and each one tells a story. One is a patriotic token with “Army and Navy” on the front. On the back is the slogan, “The Federal Union – It Must and Shall Be Preserved.” Since the majority of these were minted in Union states, their slogans and images were clearly pro-union.

A second Civil War token I have is a bit of a shocker. It’s a “Dix Token,” named for the Secretary of the Treasury in 1861 who ordered a ship captain to relieve another of command for refusing to transfer currency from New Orleans to New York City. The letter said "If any one attempts to haul down the American flag, shoot him on the spot." The token has a flag with the words “The Flag of Our Union – 1863” on the front, and on the back, “If Anybody Attempts to Tear It Down, Shoot Them On the Spot.” Wow, that’s stark.

A third one in my collection has a nicer tone. Minted in 1863, the one cent token features Lady Liberty on the front and two hands shaking on the back, with the words “Peace Forever.” Minted by Union banks, it expressed the desire to end hostilities. These three tokens give differing snapshots of the complexities of the Civil War.

I also have three “hard times” tokens from even earlier in history. These were struck from 1833-1843 as privately minted mercantile, political, and satirical pieces used in a time of political and financial crisis. In 1832, Andrew Jackson won re-election intending to abolish the Second Bank of the U.S. State banks issued notes, which fueled inflation. Hoping to curb it, Jackson issued a “Specie Circular” in 1836, saying banks must accept only gold and silver for land. Instead of calm, this created panic. The public hoarded coins (“specie”) and distrusted paper money. Depression ensued. By this time, Martin Van Buren was president, and the Panic of 1837 came to be known as the "Hard Times".

My first hard times token was minted in 1834 featuring anti-Andrew Jackson political satire. The front has Jackson with a sword and bag of money, and his claim to a “A Plain System Void of Pomp.” The figure on the back is a jackass with the words “The Constitution As I Understand It - Roman Firmness,” referring to his leadership style. On the jackass are the letters “LLD” which refer to Jackson having a “degree” in this approach. One cannot help but laugh.

A second hard times token is also satire. Called a “Not Cent,” it was minted in 1837 and has a building on the front with “Merchant’s Exchange Wall St. N York - built 1827 burnt 1835.” On the back is a classic motto, “Millions for Defence, Not One Cent for Tribute,” referring to a diplomat sent to France in 1797 to negotiate an end to French attacks on ships; the French demanded tribute, and his response became a rallying cry. It appears on many hard times tokens as humorous reference to the irony of their present circumstances, when I presume people didn’t want to pay taxes to rebuild Wall Street!

The third hard times token I have was minted in 1841, and it has a Liberty Head on front with the motto “E Pluribus Unum.” The back reads “Specie Payments Suspended” and “May Tenth, 1837,” a claim as to why these tokens were needed. On this date, banks in New York City suspended specie payments, meaning they would no longer redeem commercial paper in specie (at full face value).

So in my collection are six tokens that tell stories of hostility and violence, of satire and resentment, and of political and financial instability. While one calls for peace, another calls the president a jackass! These six coins give me a sixth sense of sorts. Oddly enough, they give me hope.

I can hold in my hands a snapshot of a history far away, with struggles and complexities I don’t really understand, yet which seem strangely familiar. We have made it through tough times before. But I am here now, in this unique time and place in history, to be the person I’m called to be and trust God for the rest.

Today’s times may seem more divisive than my dad and I have ever seen. But in the greater arc of history, we’ve seen them before, and we’ll see them again. Somehow, we make it through by the grace of God. It’s part of the ebb and flow of culture, the dark and bright sides of human nature, and the painful but passionate journey of democracy and religious freedom which we hold dear.

Columnist David Brooks said, “It’s up to the rest of us to tell a better story about America.” I choose the narrative of diversity over the narrative of division. I choose to tell it by the way I live, knowing that people who are different from me are not my enemy, they are the people I was created to love.

Let’s rekindle the value of civility, knowing we’re all on the same team. It’s less important to be right than it is to be in relationship.

Steve West is a husband, father, minister, musician, and writer who pastors Arab First United Methodist Church. His blog, “Musings of a Musical Preacher,” is found at www.stevewestsmusings.blogspot.com.
Posted by musicalpreacher at Saturday, October 26, 2019