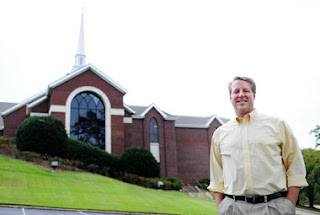 This is the article by William Singleton that appeared in the Birmingham News on Wednesday announcing our 50th anniversary at Saint Mark.


VESTAVIA HILLS, Alabama -- Since its formation in 1961, Saint Mark United Methodist Church has grown from 103 members to nearly 1,200, has moved from a school to a church, has undertaken three expansions and has seen 13 ministers lead its congregation.
But what has remained constant is its commitment to missions and Christian service, both locally and globally, church staff and members say.
That's the theme the Vestavia Hills church at 2901 Columbiana Road plans to highlight as it marks its 50th anniversary celebration Sunday.
"I always think of this church as a church with deep roots as well as strong wings," said Rev. Steve West, pastor since June. "It's old, in terms of history, but it's not that old. There's young and old. There's history as well as possibility. It's real exciting to be here at a pivotal point in our history."
The church generally sponsors three Sunday services: one 8:30 a.m. and two 10:45 a.m. services for traditional and contemporary worship styles.
Saint Mark United Methodist will hold one 10:45 a.m. service Sunday, which will feature elements of both worship styles as well as the adult, children's and youth choirs.
The church has invited former members and pastors to the service and for a luncheon and group picture afterward.
Saint Mark United Methodist draws from the Vestavia Hills, Hoover and Homewood communities.
"We've always been able to retain a strong basis of membership that has been there since the church began," said Jeff Rodgers, president of Saint Mark's Church Council. "But we also seem to bring in a continual cycle of new members who have relocated to the Hoover-Vestavia and Homewood communities."
Though the years, Saint Mark has focused on missions, sending teams to Russia, Mexico and Africa to visit orphanages and build homes for underprivileged people.
It also maintains a Christian witness nationally by organizing vacation Bible school trips throughout the Southeast, Midwest and Northeast, and locally through a vacation Bible school it offers in the summer, Rodgers said.
"Missions and service have always been a big part of our church so we're really highlighting a lot of that work that has been done the last 50 years," he said.
Saint Mark United Methodist's first service was June 18, 1961, at the former Berry High School, said Jane Landers, 75, a charter member.
The church adopted its charter Sept. 24, 1961, and then moved into its present building Sept. 8, 1962, Landers said.
Landers and her husband, Ed, have raised three boys at Saint Mark and "our middle son was baptized in the lunchroom at Berry before the church was ever built."
Beyond its missions work, Saint Mark has thrived as a congregation because church members feel like family members, Landers said. "We do a lot of missions outside the church and look out for each other inside the church too," she said.
"This is the fourth reunion we've had and every reunion we've had, we've had a lot of former members to come back," Landers said. "I think they've really formed an attachment to this church."
Posted by musicalpreacher at Monday, September 26, 2011 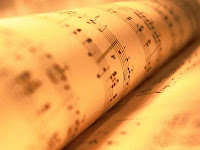 This Sunday, the church I serve is celebrating our 50th anniversary. What a great occasion it will be! I feel so fortunate to be a part of Saint Mark at such a pivotal time in our history!

In celebration of the occasion, I composed a hymn text which we will sing in worship to the familiar tune BEACH SPRING. I thought it might be worth sharing with others.


“When Our Founders Built a Legacy”

Written by Stephen P. West
In Honor of the 50th Anniversary of Saint Mark UMC

When our founders built a legacy, they were building, not in vain,
For the witness of God's majesty, grace amidst a world of pain.
We who gather at this table ask for opened eyes to see
How the Spirit leads your people to embrace new mystery.

We are thankful for the witnesses that have gone before us here,
Who surround us and encourage us still to hope and persevere.
May we lay aside our burdens, all the sin that weighs us down,
So to run the race before us and receive a glorious crown.

On the rock of faith we gather, Jesus Christ our cornerstone.
May the risen Christ be with us, knowing we are not alone.
Our foundation is to fathom how to open doors of grace,
Still to live in hospitality, offering welcome in this place.

At the book, the font, the table, still we gather in God's peace
To find healing for God's people, seeking joy and full release.
As our journey now continues, be our guide on trails we blaze.
Holy Spirit, wind and water, pour out flames of prayer and praise! 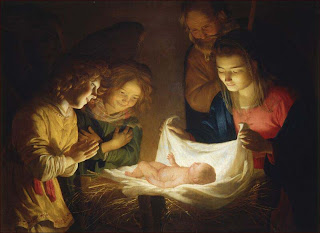 I have shared in previous posts this summer some musings about my spirituality. This has been a wonderful discipline for my personal enrichment, even as I write in order to get to know my new congregation. This week, I pick up where I left off a few weeks ago.

Today I’d like to share about one of the two deep mysteries of Christian faith, one which I have embraced as a central part of my walk with God. It’s the incarnation. This is the great mystery that the Word became flesh and dwelt among us, that God crossed over the great divide and the divine became human in Christ. I like to call our journey of living into this mystery our “incarnational spirituality.”

What that means for me is that whenever we gather in Christ’s name, Jesus is here. And he’s real. This is a promise he made that is not just about worship, and we sell ourselves short when we assume that it is. It’s true when we are feeding the hungry, caring for the elderly, counseling the hurting, loving the poor, or teaching God’s children. It’s also true when we hold meetings, tend to the business of the church, or sort out our differences with our brothers and sisters in Christ. Christ is pervasively present and I’m passionate about that.

For me, Christianity is about practicing the presence of God. It’s true in all things, not just some things. There is no divorcing the divine from the human. If we pay attention, we will notice the ways and places God is at work beneath the surface. When I live into that vision, it transforms everything!

Posted by musicalpreacher at Monday, September 12, 2011 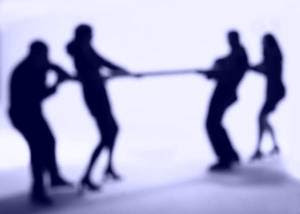 I preached today on the lectionary reading from Matthew. Jesus' promise that where two or three are gathered in his name "there will I be" is not just warm and fuzzy words about his presence in worship. These words are in a section of instructions about how to deal with inevitable church conflict in a healthy manner. They were actually about his presence when we gather ... in disagreement.

I quoted an interesting interview in Christianity Today with Bill Hybels, senior pastor of the famous Willow Creek Church on church conflict.

Here is a copy of the entire interview.

"Conflict above Ground"
Building community out of controversy.

Given the assortment of people and ministries at Willow Creek, how does the church stay united?

Bill Hybels: Unity isn't the word we use to describe relationships at Willow Creek. The popular concept of unity is a fantasyland where disagreements never surface and contrary opinions are never stated with force. We expect disagreement, forceful disagreement. So instead of unity, we use the word community.

The mark of community—true biblical unity—is not the absence of conflict. It's the presence of a reconciling spirit.

How do you teach people to fight fair?

First, we acknowledge that conflict is inevitable. Then we go the next step and say, "When your nose does get bent out of joint—not if but when—you have a biblical responsibility to take the high road of conflict resolution."

That means going directly to the person with whom you're having this conflict rather than building a guerrilla team to ambush this person later.

We also reach a kind of reverse accountability. In staff meetings or in front of the congregation, we say, "If someone whose nose is bent out of joint comes to you for a 'Won't you join my cause?' conversation, you have a biblical responsibility to interrupt mid-sentence and say, 'I think you're talking to the wrong person. Please go to the individual with whom you're having this conflict and seek to resolve it in a God-glorifying way.'"

By expecting people to fight, and teaching them how, have you created more conflict in the church?

Yes. But most of it stays above ground. Conflict that goes underground poisons the soil and hurts everyone eventually. We would rather have conflict within community than a mask of unity.

What are the issues for which the leadership of Willow Creek will go to the wall?

First, we will not tolerate biblical infidelity, a discounting of the clear teachings of Christ.

Second, we insist on the enforcement of Scripture, the "living out" of the teachings of Christ. We'll not only defend the inerrancy and authority of Scripture, but also the indisputable importance of applying biblical teaching to our daily lives in practical ways.

Third, we expect lay and staff leaders at our church to be on board with the basic vision of Willow Creek.

The last nonnegotiable is verbal discipline. In confrontation too often our verbal discipline goes out the window. People make always and never statements. They exaggerate the truth or get careless with facts. Volume levels increase. And then we wonder why we're unsuccessful in finding resolution.

Are certain types of people more prone to create conflict?

How can you be sure you're looking at a healthy person?

You can't be 100 percent sure. But a person who has never wrestled with how his upbringing impacts his adult relationship is a sure bet for a barrel of conflict.

In our interviewing process, we often ask, "Were you raised in a perfect family?" Most often, of course, the answer is no. Then we probe deeper: "How did your parents let you down? Have you worked through that?"

People on the journey toward health generally can answer yes to two important questions: (1) Will you admit that you have baggage from your past? And (2) Will you do honest work on it so it doesn't distort your relationships and work around here?

How does an unhealthy person create unnecessary conflict?

Often, an unhealthy person will say yes when he should say no. For example, we look for people who, when asked to do additional work, have the emotional health to say, "I'm swamped right now. I won't be able to get that assignment done by the due date. Can we discuss how the assignment can get done another way?"

Another tip-off is when a person cannot subject himself or herself to loving, constructive evaluation. If people are terrified of the evaluation process or hostile to it, there's usually an underlying issue that needs to be explored and understood.

What are some standard precautions to head off unnecessary conflict?

Around Willow Creek we talk about having "check-ins." If we sense tension with someone, we sit down and say, "I just need to check in with you. Is everything okay between us?"

Once a month, we also have a question-and-answer time with the staff, and in addition, we have regular talk-back sessions with those who work in the sub-ministries.

The more interactive we are, the more we preempt serious conflict, because we get people talking before conflict goes underground.
Posted by musicalpreacher at Sunday, September 04, 2011