Embracing Mystery in a Culture of Certainty 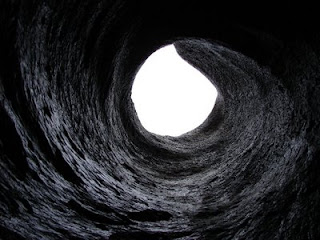 This article was published in Alive Now, a periodical publication of The Upper Room, in the November/December 2015 issue. The theme for the issue is "mystery."

A version of this article also appeared previously in the "Faith and Values" section of the Huntsville Times.

I remember the moment I met Jeff, who led the praise band for the church I had come to serve in Huntsville, Alabama. “I heard you are a rocket scientist,” I said. “Yes,” he replied, “but I don’t do that here!” He smiled with a width I’ve grown to love and went back to playing his guitar.

The church I served at the time was fruitful in the context of a highly technical culture. We worshiped ten minutes away from the NASA space flight center where Space Shuttles were designed and built. Nearby was the arsenal where missile command for the United States was controlled.

Yet I discovered that the people had a corresponding hunger for mystery. In Ephesians 3, Paul describes his call to preach the “unsearchable riches of Christ” and “make plain the mystery.” Do we dare claim a faith that is about something bigger than what we can identify, control, or explain?

I come from a long line of pastors that go back to the days of riding horseback. At my great, great, great uncle’s gravestone these words are chiseled: “For 50 years preached the unsearchable riches of Christ until his decease.” Those words echo Paul’s words and continue to touch me deeply.

Years prior to arriving in Huntsville, young in ministry and dealing with my first frustrations and disappointments, I went to that uncle’s grave and knelt. I considered the hardships of the early circuit riders. My heart melted in realization that my struggles were not just about me. The difficulties I was going through placed me in the company of generation after generation of people who had experienced the unfathomable richness of Christ’s love. Seeing my life in context of a bigger mystery gave me a great deal of hope.

While serving in Huntsville, I felt led to write my own mission statement. I kept it by my desk the whole time I was there. It read: “I have been placed here in the Huntsville culture to help people who are conditioned to think they can fix any problem, explore any place in the galaxy, or settle any conflict by force to live a life that encounters mystery and embraces uncertainty.”

I tried to live by it, but God had a great surprise in store for me. The people taught me much more about how to do that than any insight I could have brought them. They already longed for mystery; that’s why they were there. They implicitly knew this, and lived faithfully in that creative incongruity. I suppose all of us do.

Each year during the season of Epiphany, we remember the wise men who saw a bigger picture and followed a star. The King had been born right under the noses of the people of bustling Bethlehem, and it took some stargazing Persian astrologers to see it.

Sometimes we are so concerned with what’s right under our noses that we miss the mystery. We water down the gospel to acquiesce to a culture of work and rewards. We reduce the message to a few principles to follow in order to make our lives a little better. The problem with all that is that we’re still in control. Face it, we’re control freaks.

But the good news of the gospel is that certainty is an illusion. It’s mystery that’s real. Christ makes plain the unrevealable and reveals the unsearchable. Christ makes God touchable, lovable, knowable, even feelable. This mystery can’t be encapsulated in a few bullets on a power point slide. It can only be absorbed throughout a lifetime of beholding its light.

Stephen P. West is a husband, father, minister, musician, and writer who serves as pastor of Arab First UMC in Arab, Alabama. His blog "Musings of a Musical Preacher" may be found at stevewestsmusings.blogspot.com.
Posted by musicalpreacher at Wednesday, November 18, 2015

Singing My Heart Songs in Singapore

This is my column published in The Arab Tribune on Saturday, November 7, 2015.

As I walked out the door of my Arab home to get to the airport early in the morning, I stopped for a moment to ask Siri, "how far is it to Singapore?" My phone offered her reply with characteristic wit. "9,981 miles as the crow flies."

I got on the plane for the 30 hour sedentary journey, but my mind started racing. Though my wife's family were moving her parents to an independent living apartment, and I was quite literally going to be "as far away as possible," I couldn't pass on this opportunity.

I was recruited by the director of an ecumenical ministry dear to my heart. He invited me to join him on this mission of the Upper Room, the spirituality center of Methodism in Nashville. We were launching the first Academy for Spiritual Formation held in Southeast Asia. 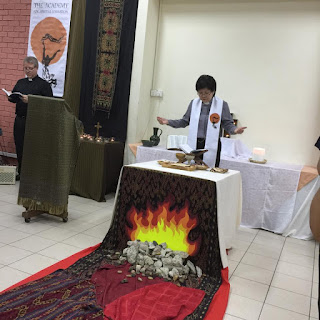 Since I was going this far, I went two days early to explore the country before duties began. I went to taste and see. Boy, did I. It was simply amazing.

Singapore hosts the busiest port in world, and is a first class city and financial center. It has developed dramatically in the 50 years since recovering from Japanese occupation during WW2 and declaring independence 20 years later.

It is clean and bright, and hosts some of the most beautiful gardens and cultural highlights in the world. The people are free and happy, and doing well financially. The locals say the state bird is the "crane", because you can see the steel contraptions busy with construction all over the place.

There is not even one package of chewing gum for sale. If you wonder how that can be, ask a local who says "it's a FINE city," referring to the fees the government imposes for spitting out gum (or spitting at all for that matter), for littering, and the like. So while at first it seems curiously western, it's not so western when you look a little deeper.

There is no drug problem because there is a death penalty for distributing, and there is no litter because of the $200 fine. The city is lined with Disney quality manicured shrubs and coordinated lights. Few have cars because of the $45,000 license required for permission to drive for ten years, and 80% of the people live in government "flats."

The animals are even different. I saw my first bearded pig and heard my first barking deer at the zoo. I absolutely loved the food and hospitality, though I admit I could not bring myself to try their famous "fish head curry" since I make it a habit not to eat things that look back at me. But of all I tried, the only thing that just didn't work for the western tongue was a dessert with shaved ice with gelatin and fruit jam, along with kidney beans. That was interesting.

One of the most delightful clues about the differences in our cultures came to me after a long day of walking in the tropical humidity. My host dropped me off at a Hawker Centre, which is kind of an Asian food court. I ordered iced milo (a chocolate drink which is sort of like Yahoo). The attendant asked, "are you having here?" I said, "no, I'm having iced milo." "Are you having here?" he repeated. "No, iced milo." I had no idea he was asking me if I was "eating in". This was my first lesson in "Singlish", a unique mix of English with Mandarin syntax and other dialects.

I reminded my new friends that here in Arab, Alabama, we talk funny too. We say "hey ya'll," and we fix things that are not broken ... like fixing dinner and fixing to go to the store.

One of the days I was touring, I took a bicycle tour with a local guide, one on one. We saw Chinatown, the business district, and the marina area. Since we toured two temples, we talked about religion and I got to share some of my faith. He knew everything there is to know about Buddhism and Hinduism but very little about the church. He didn't know the word Protestant, or who Martin Luther King, Jr. was. Imagine that.

Yet with all these incredible differences, when I arrived at the Academy what struck me the most was what we held in common. When we gathered for worship services I was responsible for coordinating, with Christians from Singapore, East Malaysia, West Malaysia, Australia, and Hong Kong, my heart began to melt.

The worship had a beautifully Asian flair with gongs and percussion instruments and Asian musicians. Who in my neck of the woods would have thought to use a room-sized palm branch on the floor under the altar to decorate? We sang some beautiful Asian hymns I'd never heard, yes, but by and large they knew my songs. Or perhaps I should say I knew theirs. 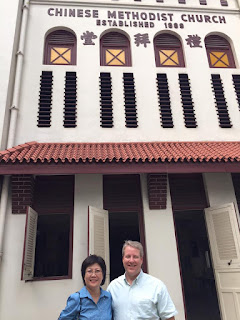 From the first praise song in worship, "Open the Eyes of My Heart," to their request that I lead the rousing camp song "Rejoice in the Lord Always" in the conference room, the sounds of music connected the hearts and souls of people from all over the world. Though I'd never donned a clerical collar before (this is a tradition of Methodists there, but not here), I felt comfortable in my skin.

The more we shared our faith, the more it dawned on me that the communion table we gathered around was the longest table in the world. I happen to know it was at least 9,981 miles long, as the crow flies.

No geographical distance, cultural diversity, or political complexity can take away our common story. We may have a different history, but His story is the same.

My new Christian friends laughed heartily when I told them the name of my town was pronounced "Ay-rabb", and there were no Muslims in town I was aware of. But my heart was strangely warmed by what we have in common, not what makes us different.

Perhaps that's because it is precisely the things that warm the heart that are what we hold in common. We're different, but not so different after all. I left having experienced one of the most amazing journeys of my life.

Hopefully, I helped plant seeds for a cross-continental retreat to bless lives for generations to come. But most of all, I left knowing I have found new brothers and sisters who sing the songs of my heart.

Steve West was in Singapore Oct. 7-17. He is a husband, father, minister, musician, and writer who pastors Arab First United Methodist Church. His blog "Musings of a Musical Preacher" may be found at www. stevewestsmusings.blogspot.com.

Pictured are two photographs of Niam Kai Huey, one of the pastors I worked closely with in the Singapore mission, and myself.
Posted by musicalpreacher at Saturday, November 07, 2015