Paws for the Holidays 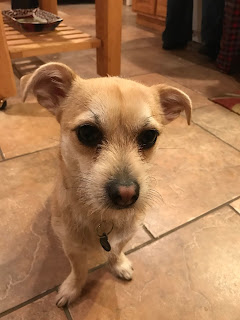 This is my column that appeared in The Arab Tribune on Wednesday, January 4, 2016.

Every year, it seems something unusual makes my Christmas holidays delightful. It serves to remind me that blessings always come, if we just pay attention.

One year, when my daughter was a little girl, it was decorating her dollhouse with the same paint and carpet from our newly remodeled home. Another year, it was musing over the mice scurrying in our basement.

Still another year, it was having an exchange student from Germany in our home. After taking her to our Christmas reunion where we told the family holiday stories of me and my three brothers, she said, "I just have one question. How did your mother survive?"

Who'd have thought that this year it would be having a puppy home for the holidays?

Let me introduce you to Jameson. He is the cutest and best behaved puppy on the entire planet, of course. He is a small terrier mix that belongs to my daughter, who is in nursing school in Birmingham.

My wife and I got to keep him for the five weeks between Thanksgiving and Christmas while his "Mommy" had exams. It was pure joy (most of the time). He loves to play ball and chase bones, and he has the cutest little growl when he plays tug of war. He always comes back immediately when we let him out in the yard to do his business for a few minutes and then call him ... unless he gets distracted by something of a canine or feline variety.

Jameson is less than a year old, so the first time I took him on a leash to Arab City Park during the holidays, he had never seen Christmas lights. He wasn't so sure about the tunnel of light between the park and the historical village, especially with little girls running through it. But we went so many times, he overcame his anxiety.

He can sit, lay down, hop up on his hind legs, and (thanks to his holiday stay with us) shake hands. He is learning to roll over. When his roaming snout draws him toward a plate of holiday food, the words "leave it" keep him from eating it. Boy, he's smart.

He learned a less conventional trick during the holidays on his own. When I am laying on the couch reading or playing on my phone, sometimes it suddenly gets quiet. Too quiet. Then I feel his doggie breath.

He has sneaked up behind me and careful placed his tennis bone (yes, that's a "thing") just above my shoulder. He's just daring me to notice, grab the bone, and throw it again. I'd like to say we trained him on this one, but now that I think about it, I think he trained me.

We created a most unusual game with Jameson. We were sitting around in the living room drinking hot apple cider and I theorized that he always jumps in the lap of whoever moved last. So we started taking turns wailing and wiggling our arms in the air. This was of course a thoroughly scientific method and provided evidence that my theory was correct.

As a man of faith, I know what Christmas means. It is much more than a glib acknowledgement that it's Jesus's birthday (news flash ... nobody knows what day he was born). The reason it's a such a great feast is because it's about the miracle of the incarnation.

The Word became flesh and dwelt among us, and we beheld his glory. It was the kind of glory that chose to come through enfleshed humility, a love that only begins to unfold from a wrapped up baby in a barn. It is a love born to an unwed mother everybody must have been gossiping about, but that shepherds heard the truth about from a more reliable source.

And there were animals conspicuously hanging around in every aspect of the nativity.

Somehow, in his own simple way, Jameson enfleshes the love of his creator, too. Just as the "grand miracle" of Christmas (thank you, C.S. Lewis for that phrase) is this divine-become-human strange way of saving the world, my "grandpuppy" reminds me of the lesser miracles of life and love, of joy and playfulness, that are wrapped up in the greater miracle of the incarnation.

Jameson reveals to me the reasons why even the animal kingdom expresses the hope of the Messiah. So much of the prophesy of the coming of Christ is a picture of the "peaceable kingdom" where lion and lamb lie together.

As I am writing this, here he is, laying his head on my stomach. His eyes are finally getting droopy and he is falling asleep. I thought he'd never want to quit playing fetch. We are laying in the couch by the fire, and it's 10:37 pm.

If Jameson is my grandpuppy, I guess that makes me a "grandpappy". And it's no coincidence that grandpappy rhymes with "happy."

Steve West is a husband, father, minister, musician, and writer who pastors Arab First United Methodist Church. His blog, "Musings of a Musical Preacher," is found at www.stevewestsmusings.blogspot.com.
Posted by musicalpreacher at Saturday, January 07, 2017 Links to this post