Meditation on a Civil War Ancestor 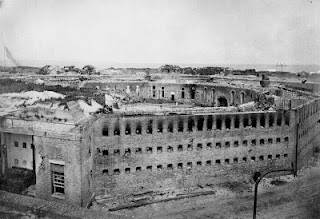 I spent a little time over Memorial Day Weekend perusing family history, particularly on one of a dozen ancestors on my tree who served in the military during conflict. None of them died in war, and they lived to have children (otherwise they wouldn’t be my ancestors!). But I have cousins on my tree that did give the ultimate sacrifice.

In this season of midlife spirituality, I’m aware of a kind of inner integration going on in my spirit as I honor ancestors and learn from the hard lessons of history. I spent many of my early years as a pacifist and still believe in Jesus’ call to be a radical peacemaker. But as I have matured, I have grown to accept some war as “necessary evil”. I consider myself a just war theorist, upholding Christian values but regarding some conflicts as justifiable and appropriate. It has been a journey for me.

This weekend, I explored the family story that my great grandfather, George Hamby, had been in the 1st Alabama Artillery in the Civil War and was a prisoner of war. I confirmed that his name was indeed on the muster roll for Company E of this battalion, and learned the history of how he was captured. His unit was stationed at Fort Morgan, which fell during the Battle of Mobile in August of 1864. 400 Confederates were captured, including George Hamby, who was then imprisoned on Ship Island off the coast of Mississippi. My great grandpa later worked in the cotton mills during Reconstruction and had a large family, including two sons who were Methodist preachers. One of them was my grandfather, Rev. C.P. Hamby, Sr.

Part of the maturity of spirituality is integration, holding onto the solid principles of Christ, and still integrating the history of who we are into the whole. We discover that life is not so either-or, black and white. There is, ironically, for those of us that descend from the wrong side of the Civil War, a lot of “gray” to embrace. It is part of the story of Southern tragedy. Though the institution of slavery was clearly a most heinous crime against humanity, we are left with a mixture of pride and tears.

I pray that all of us, in our spiritual quest for integration, can ultimately return to sort of a second naïveté. Life really is ultimately about becoming more Christ-like. In the midst of every trial, and the insanity of all the conflicts that rage in the world, we are a people who overcome and become. That is our core identity.