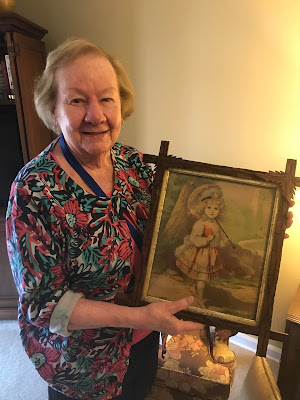 This is my column that was published in The Arab Tribune on Wednesday, March 8, 2017. Pictured is my cousin, Marian, with a Civil War era family treasure back in her hands.

Oscar Wilde once said "the smallest act of kindness is worth more than the grandest intention."

Recently, my family received one I will never forget. Because of a random act of kindness from someone I've never met, an 1866 wedding gift made it back home.

I have to pause to tell you that years ago, I got bitten by an insidious disease called the "genealogy bug." I contracted a love for my ancestors. I am my generation's family historian (I suppose every family needs one).

Yes, I can make your eyes roll with my incessant stories because nothing is more boring than someone else's family tree. For a while, even my kids told me I was only allowed to tell them one family story a day. That was when they were teenagers and I was in the throes of my research.

But every so often, something happens that makes it exciting and fun for all, and it's worth all the work. Here's how it happened.

I have online memorials for some of my relatives on FindAGrave.com. A very nice lady named Peggyjo from Lake Butler, Florida found my email when she was Googling one of the names I had memorialized. She had been visiting an antique shop on the border of North Carolina and Georgia while traveling.

There, she found a very dirty old lithographic print in a unique wooden frame. After she turned it over, she realized it had clues inscribed on the back, a date with a few names. The hunt was on.

She purchased it with the intention of finding its owners. She began the clean up process and it revealed a beautiful photo of a young girl with an umbrella, underneath all the grime. Beginning her search, she discovered it was a wedding gift in 1866 to a Mrs. Winne Rainey, the mother and grandmother of a few others named on the back of the frame.

Peggyjo traced the family to her great grand daughter, Marian. But she could find no information on her because of the privacy rules on ancestry.com regarding personal information on those who are still living.

It happens that Marian is my second cousin on my Dad's side, and I know her well. Peggyjo had hit the jackpot when she found my email, seeing that I was somehow related to the names on the frame. She wrote to me, hoping I could help her return this precious piece of history to the right hands. She said, "I have no reason other than it is a passion of mine to research antiques, and I simply would love to see the right hands holding the lithograph again."

You should have seen Marian's face when I went to visit and brought her this serendipitous gift. She recognized it immediately from her childhood. It had belonged to her grandparents, who owned a little cabin in the woods. The cabin had been sold years ago, presumably with the little frame in it.

But now this Civil-War era wedding gift is back in the hands of family. That's where it belongs.

Everyone is probably familiar with the phrase "random acts of kindness." It's a bit self-explanatory. They are those surprising, creative, and unusual actions to help somebody out or cheer them up.

There are resources all over the internet for random acts of kindness. It's a craze in schools, communities, and homes, and it's a good thing. The idea is to share love in the simplest ways possible.

I have heard about them many times before, and I try to practice them. But my eyes were opened and my heart was warmed by this random act by someone who went to a while lot of trouble. It meant the world to someone I love.

In part because of the inspiration I received from being a part of such a random blessing, in the church I serve we are having a most unusual Lent. In my faith tradition, the forty days before Easter are usually a time of introspection and meditation, and it's often practiced by giving up something for Lent.

This year, we are challenging the congregation to "take up" something for Lent, something that moves us out of our comfort zones into the creative and unusual. We are doing a "Random Acts of Kindness" campaign.

We do this because there is nothing random about the love of God expressed through the cross. Yet when we are filled with that love, it spills over into life in ways that seem random and completely unexpected.

I hope you get blessed by one! And I invite you to do a random act of kindness for someone today. It makes all the difference in a chaotic world.

Steve West is a husband, father, minister, musician, and writer who pastors Arab First United Methodist Church. His blog, "Musings of a Musical Preacher," is found at www.stevewestsmusings@blogpot.com.
Posted by musicalpreacher at Friday, March 10, 2017 Links to this post