Bless to Me Prayer 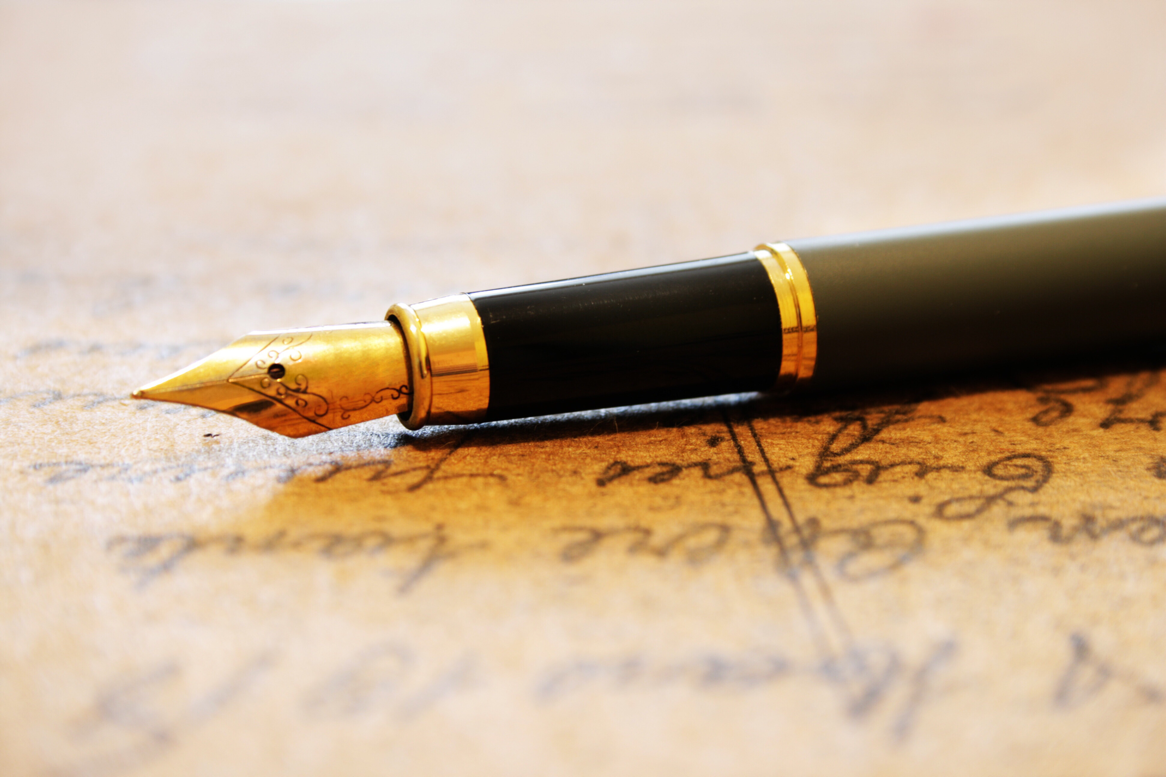 I recently took about a dozen friends from our church on a prayer retreat to the Upper Room in Nashville.
One of several highlights was to spend some time with Beth Richardson, the Director of Prayer and Worship at the Upper Room. She taught our group of the ancient Celtic tradition of the "Bless to Me" Prayer and invited us to write one. My thoughts immediately went to what was right in front of me, which so often I fail to be grateful for.
Here is my prayer.
---
Bless to me this pen I hold.
With it I trace the light
and the shadows
of each day,
putting into words
the unspeakable nudges
of the heart.
Bless to me the ink that pours,
making permanent
the fleeting thoughts,
memories, and prayers
of my spirit.
Bless to me the paper on which I write,
which allows me to read
the contours of my
journey's ups and downs,
with a larger perspective,
even God's perspective.
Bless to me those who have written before me,
tracking the patterns
of the spiritual life
so I am going
where others have gone before.
Bless to me this time,
for all time spent reflecting
is the best time spent.
Bless to me the idea that
I am not writing for others,
not really.
I am writing for you,
and for you to touch
and heal me.
Bless to me, Oh Lord.
Bless to me.
Amen.
Posted by musicalpreacher at Friday, September 22, 2017 Links to this post

A Southerner Against White Supremacy 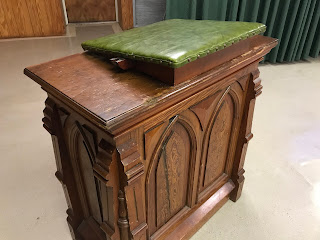 This is my column which appeared in The Arab Tribune on Wednesday, September 6, 2017.

Pictured is the portable pulpit of Dr. Martin Luther King, Jr., referenced in the column.

I am definitely a southern gentleman. The farthest north I’ve ever lived is Athens, Alabama (why, that’s darn near close to Tennessee!). My mother was a southern lady and I grew up on Dixie cuisine. My soul food is fried chicken, mashed potatoes, and watermelon, and my favorite delicacy is fried chicken livers with ketchup. I have concluded that there are two kinds of tea ... sweet, and "not worth it." As for grits, well, they are manna from heaven.

I believe we need to hear southern voices stand up and speak against white supremacy. White supremacy is wrong. It is hateful, it is anti-Semitic, and it is evil. There is no room for it in public discourse, and we can't just normalize it. That's because this kind of racism is not a political issue. It's a gospel issue.

Now that I've gotten that out of the way, I understand the desire to remember southern heritage. Southerners do not believe we were right (or even just righteous) about the Civil War. We joke about it bring the war of "northern aggression” as a way of honoring our past with a bit of humor. I wonder if those who live outside the south can really understand the sense of southern tragedy that is attached to remembering where we've been. It tastes bittersweet.

Yet another set of ancestors came from a county in North Georgia that had outlawed slavery long before the war. The family story is my relatives indeed did not believe in it, but joined the confederate fight simply because they didn't appreciate their town being invaded by Yankees. I wouldn't call that being driven by racism.

So I know from my own blood that the story of race relations in our country is more complicated than it is black and white, proverbially speaking.

I realize that the Charlottesville protest, as offensive as it was, was over a carved symbol of confederate heritage. While I can in no way accept the use of confederate flags with swastikas, and chants with torches, because of the obvious overtones that bring back to life a painful evil in American history, at the same time I know cultural symbols are important. I encourage open conversation over symbols like statues and how they are perceived from various viewpoints. I also believe communities should make their own discerning decisions.

Remembering the power of symbols for good or for evil, I went to see a potent symbol in Montgomery recently. Just a couple of years earlier, I had stood on the steps of the capital where Jefferson Davis was inaugurated as president of the confederacy. At the time, I looked down the street and imagined how just a little over 100 years later, the civil rights march from Selma to Montgomery culminated at this same spot. I had planned to take a tour someday of Dexter Avenue Baptist Church, the building in view from this scene on the steps, where Martin Luther King, Jr. started his ministry. Since I had a meeting in Montgomery, this was a great and timely chance.

I stood at the portable pulpit from which King preached the sermon "How Long? Not Long!" at the conclusion of the march from Selma. I considered that the star on the capital steps I had once stood by was indeed an icon of cultural heritage, and that this pulpit was too. The step at the capital is my Alabama, but this pulpit is my Alabama too.

This platform where I stood a few moments was where Dr. King spoke the immortal words, "the long arc of history bends towards justice." I recalled that this march from Selma and its concluding speech happened precisely one month before I was born.

We must not forget it. All of it.

I know that for many of us in southern small towns, life is a fairly insular experience. There are pros and cons to that.

I remember years ago when I was growing in my personal commitment to stand for the gospel of Christ and therefore against the original sin of racism in our great country, and I realized I had no close friends who were African American. I began years of praying until God gave me one, a dear soul friend. This changed my whole life.

I'd like to challenge us all to have a good look within, but also to find a way to connect significantly with someone dramatically different than us. Make a cross-cultural connection. Discuss what symbols are meaningful to their culture and why others may bother them. Listen with your heart and plan to come to a whole new conclusion.

In the meantime, it’s important to call out racism out for what it is. Racism has a very specific definition. There is no racism in "playing the race card," speaking out on political issues, fighting for fair treatment in the criminal justice system, or counter-protesting white supremacists. We can argue about these things, but they are not racism. The dictionary says racism is "prejudice, discrimination, or antagonism directed against someone of a different race based on the belief that one's own race is superior." That last part is important.

Those who assume that people who oppose white supremacy, or who stand for issues important to African American experience, are racist must be wearing a different pair of glasses from me. White men are not being persecuted by political correctness. Those of us who say that are blind to our own white privilege.

I say all this as a deep fried southern preacher, who loves our southern heritage and desires that we remember it in a way that moves us beyond the hatred of the past and honors the glorious ways we have overcome. Let's actively remember our heritage ... all of it ... so we can move forward, not backward.

In the kingdom of God, there is a way to honor the past without living in it. Jesus said "no one who puts their hand to the plow and looks back is fit for the kingdom of God." Let's remember where we've been and put our hands to the job of making things better, until freedom's song is sung from sea to sea.

Rev. Steve West is a husband, father, minister, musician, and writer who pastors Arab First UMC in Arab, Alabama. His blog, "Musings of a Musical Preacher," may be found at stevewestsmusings.blogspot.com.


Posted by musicalpreacher at Tuesday, September 05, 2017 Links to this post

I wrote this prayer of confession for a communion Sunday when I was preaching a sermon "Where's the Fire?", in reflection on the story of Moses and the burning bush.
"Lord of holy fire and living water, God of wind and flame, descend to us now and burn in our hearts. We honestly and earnestly confess our sin, and we ask for your renewing flame to burn away the impurities of our souls. Kindle in us a deeper desire to serve you, for our embers grow cold. Holy fire, blaze before us and draw us out of our chilled complacency into the warmth of your holy light. Through Christ we pray. Amen."
Posted by musicalpreacher at Sunday, September 03, 2017 Links to this post