Not Incognito but Incarnate 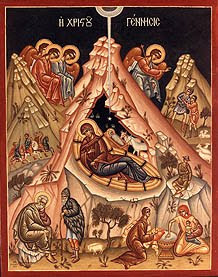 You’ve heard it a hundred times. Every year at Christmas, we retell the angel Gabriel's promise that Mary will have a child named Jesus. Every year we are reminded that it was a virgin birth. Mary was engaged but not married. Yawn. Same story. On to the shopping.

But if we pause to ponder how powerful the virgin birth is, we might find that this simple detail in our sacred story is a key to unfolding a deep mystery. Christ was conceived of God and of woman. The divine came to live and dwell among us. We’re talking real flesh and blood. The incarnation means that God came not incognito but in “carnate” - in the flesh.

Don’t yawn about this one. Ever since the tower of Babel, we have tried to get a handle on God. We’ve tried to clutch and take hold of the divine. We’ve tried to transcend ourselves but we can’t. That’s why God came to us. The divine became human because the human just couldn’t grasp the divine.

I wonder how many Christians have embraced the power of the cross and even live in the victory of the resurrection but have forgotten the mystery of the manger.

We tend to think of God like we think of our pocketknife. We carry him around with us, pull him out when we need him, and hold him within our grasp. Some even think we’ve got the ability to dispense God’s power if we pray just right. How presumptuous Christians in North America have become! We’ve twisted faith to conform to our culture of functionality and control mentality.

When we develop that kind of spiritual arrogance, we have forgotten what it means to be human and in need of grace. Spirituality starts with the fact that we are less than God. We can’t use Jesus to “get what we want out of life”. The raw truth is that without God, we are a broken, hurting, lonely bunch of people with nowhere to go. As hard as we might try, we’ll never get a handle on God.

That’s why God came to us. The divine became human. An ancient theologian said, “he became what we are so that we might become what He is.”

Let God do the crossing over. Give it up. Stop trying to grab hold of God and maintain control of your life. Receive him instead as if your heart is the manger where he hopes to lay. Let him enter in.

You may indeed be touched by what you can’t possibly grasp.
Posted by Steve West at Thursday, December 24, 2009