In Remembrance of April 27 Tornadoes 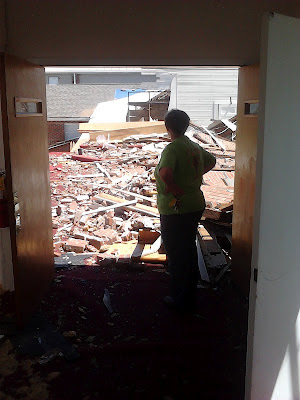 As we approach the first anniversary of April 27, when 63 tornadoes ripped through Alabama last year, I would like to share again a picture I took and posted last year, with my friend's permission.

This is my friend Dorothy Ann, who was pastor of Ford's Chapel United Methodist Church, gazing into what was their original, historic chapel and perhaps the oldest Methodist sanctuary building in the state. I remember seeing her standing there in a surreal moment, as if searching for something.

It was a potent moment to be there when she and the faithful people of Ford's Chapel were processing all this. It was as if time stopped, and in the stillness she was listening for the voice of God.

I thought about Mary, lingering around the garden of the tomb wondering where Jesus' body was. The people in Harvest, Alabama learned what Mary learned that day.

Jesus had risen. He was already there and quite alive in their midst, calling their name. God is a God who rises, and we too will rise.
Posted by musicalpreacher at Sunday, April 15, 2012