My Fourth Great Grandfather's Fight for Freedom of Religion 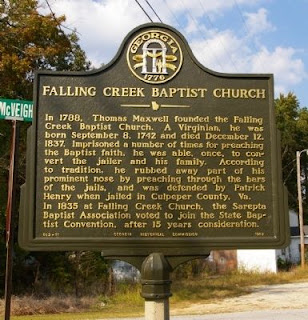 As we approach Independence Day, I share a story from my family heritage that I told on Sunday. I hope it bears repeating. Six of my ancestors fought in the Revolutionary War. One of them also made a mark on our religious history. My fourth great grandfather was Rev. Thomas Maxwell. Though I have multiple Methodist circuit riders in my family background, it is the Baptist preacher who made it into the history books!

After Thomas Maxwell fought in the Revolutionary War, he began preaching the Baptist faith he believed. He was imprisoned for this, since his teaching did not reflect orthodox Anglican beliefs. The story goes that he continued to preach through the bars of the prison, so that his protruding nose was rubbed raw. Patrick Henry defended his religious liberty and sought his release. In time, Patrick Henry went on to support and help shape the writing of the first amendment, guaranteeing freedom of religion.

Just imagine for a moment the period of time, after the Revolutionary War was over, when the persecuted became persecutors. So my fourth great grandfather was part of the movement to truly claim freedom of religion. His persecution became a catalyst. It spoke of something that we’ve had to say many times, whether the issue was slavery, child labor, women’s rights to vote, or the civil rights movement. His persecution said “wait a minute, do we believe in freedom, or not?”

Sometimes I get frustrated with American religion, with all the completing groups and independent churches, the crazies on TV, watered down Christianity that resembles self-help, and theological challenges to Biblical faith such as fundamentalism, unbridled Pentecostalism, and prosperity teaching. We also live in a time when dialogue with other religions has been rendered difficult because of politics and world events. But whenever I get frustrated, I remember my fourth great grandfather. I remember that if we value freedom of religious expression, we have to trust that the truth will work itself out in God’s time.

This Wednesday, I encourage you to celebrate the two essential freedoms our nation was founded on: Freedom from tyranny of foreign rule and freedom for religious expression. Let’s not confuse these essential freedoms with other things we so easily call freedom, for the essential nature of what it means to be human is not that we are independent individuals, free agents who can do whatever we want with no rules or social responsibility. Rugged individualism goes against the grain of our core identity as part of the body of Christ, and our Christian identity must trump any manufactured concept of patriotic identity. Freedom has never meant everybody is on their own, with no regard for our neighbor. For Americans, it has always meant we are free to take responsibility for our own destiny as a nation and free to follow God however we feel led.

My father's mother was Doris Maxwell West, daughter of the Maxwells of Gainesville, Georgia, descendants of Rev. Thomas Maxwell.
Posted by musicalpreacher at Monday, July 02, 2012