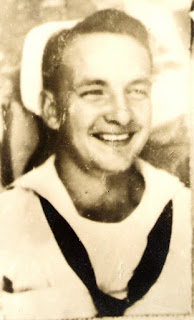 Recently, on Memorial Day, I posted a picture of my Uncle Marvin Hamby on Facebook and honored his sacrifice for our country. Unfortunately, I never met him. My mother's brother was lost in World War II in October of 1942. He was serving in the navy on a tanker in the North Atlantic, supplying oil to the British. A German torpedo struck the tanker, and since there is a likelihood of explosion, my uncle and most of his crewmates jumped ship into the freezing water. Ironically, the ship did not explode but very few survived to tell the story.

My cousin Warren, who in his younger days resembled Uncle Marvin greatly, shared with me an inspirational family story that I had never heard. I share it with you in hopes that it helps us all see God at work in all things, even terrible things, if we keep our spiritual antennas up.

When my grandfather, Rev. C.P. Hamby, was a country preacher on Sand Mountain, he got a telegram saying Marvin was declared dead. It confirmed the family's greatest fears after having previously heard he was missing. It happened to be a Sunday morning when he got word, and Grandpa Hamby went on to the church he served. Before preaching, he shared with the congregation the terrible news he had just heard. He led the church in prayer, in which he asked God to forgive the enemies responsible for sinking Marvin's ship. He prayed that God would protect them so that their parents in Germany would not have to go through the great pain he was going through.

In the congregation was a young man named Jim Goodwin. He was inspired by the spirit of forgiveness Grandpa Hamby had, and this inspiration led to his decision to become a missionary. He told this story in worship one Sunday, knowing that my cousin Warren was in the congregation.

I have known Jim Goodwin and his brothers in ministry most of my life and his brother Bert did my mother's funeral. Jim became a missionary in Brazil and retired there to stay among the hundreds of people in that country that he led to Christ.

God can even use something as terrible as war, death, and tragedy for his purposes.

I do not believe that war is God's plan for humanity. However, I am also fond of saying "God never wastes a hurt." What is going on in your life that God might be using for good?
Posted by musicalpreacher at Thursday, June 06, 2013