Manna from Heaven, Grits of Grace 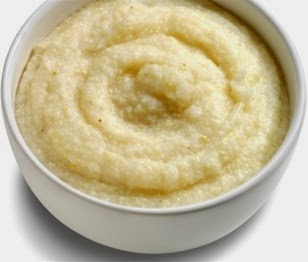 I have this theory. I think the manna from heaven, which God rained upon the children of Israel, was really grits.

I love grits. It's true that I am a thoroughbred Southerner. The farthest north I've ever lived is Athens, Alabama (why, that's practically in Tennessee!). Like any true Southerner, I implicitly know how much a "mess" of greens or peas is. I know how to "fix" things that aren't broken (like fixing dinner and fixing to go to the store). I "reckon" all the time. And I know how to eat grits.

I know they are the manna from heaven because the word "manna" means "what is this stuff?" No one seems to know what they are.

I was once on the leadership team of an Academy for Spiritual Formation holding our week in Dubuque, Iowa. I had a lot to learn about cheese curds, but a lot to teach about grits. I find it odd that in the part of the country where the most corn is grown, they have no idea what manna of food can come from it. For the closing week of our two-year journey, I asked the ladies in the kitchen to "fix a mess of grits" for the group. I considered it a parting gift to the community.

I had to bring a package of them on the plane, of course. When I brought them to the kitchen, the highly professional kitchen staff said "now, tell us, how do you prepare these?" I showed them the directions on the package, but then explained to them that plain grits are like an empty canvas waiting for the painter. There were creative options, but for this group I thought butter, pepper, and lots of salt would do the trick.

I guess I should have clarified the difference between "lots" and a "mess." I think they put a bucket in. They were the saltiest grits I've ever had, as if they had been cured with the bacon. Oh well. I suppose some folks don't understand the nuances of being a Southern gritsocrat.

Some of the retreat participants seemed enlightened by the experience, but others said, "what is a grit anyway? I'm willing to try one." No one seemed to know grits came from corn.

But that's how I know grits are manna from heaven. I have definitive biblical proof. In Psalm 78:23-24, the scripture reflects on God's provision in the wilderness "though he had commanded the clouds from above, and opened the doors of heaven, and had rained down manna upon them to eat, and had given them of the corn of heaven."

There it is, corn. That proves it. They are indeed grits of grace.

All this is to say that God provides for us. He gave the people of Israel just enough manna for that day; They could not store it or save it, except on the 6th day for the Sabbath. There was mystery in not knowing what it was, this flaky substance that tasted like honey. There was faith in trusting that when the dew lifted tomorrow morning, it would be there again. We may not have everything we want, but we believe in a God who provides what we need.

God provides for you.
Posted by musicalpreacher at Wednesday, September 24, 2014