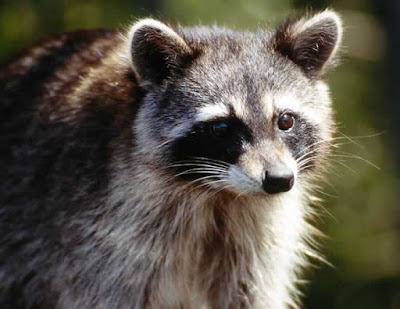 This is the full version of my raccoon story, published in The Arab Tribune on July 29, 2015. Abbreviated versions have been published in The Huntsville Times, The Upper Room, and Alive Now.

The early years of ministry left me with some bruises and a few scars. I was young, and I had a nagging ability to hold onto residual pain from those occasional conflicts that come our way.

One spring, my family went camping at Cumberland Island, a wildlife preserve off the coast of Georgia. Our campsite, nestled in the palmetto, came with two poles. One held a lockable cage to protect food from the raccoons. The other had a single hook to hang the trash out of their reach.

One evening, I suppose I neglected to tie up my trash. I woke in the night to the noises of plastic ripping and metal clanging. Yes, the raccoons had come.

In my typical fashion, I rolled over and went back to sleep until morning. But remembering the raccoons, I rose early to have a look.

The campsite was a mess, with trash and other items strewn everywhere. Somehow, they had even managed to open our cooler with the child-proof lock. Sitting at the picnic table in the midst of the mess, I was suddenly swept into one of the most wonderful meditation experiences I'd ever had. I pondered three amazing things as I looked around the site.

First, I thought, "This is what raccoons do. There's no reason to be angry." Second, "They really didn't hurt me." It's aggravating, yes, but I am no less for it. Finally, and most importantly, "Next time, I'll tie my trash up higher."

I grabbed my journal. I felt led to list all the "raccoons" of my life, the people who had sorted through my trash for something to criticize or consume. Then I prayed over each of them in light of my revelations. This is what raccoons do. They didn't hurt me, not really. And yes, maybe it's time for me to establish a few boundaries, keeping my "trash" tied up higher. It was a wonderful time of letting go.

Then I had one of those moments when I was led to just the right scripture. I turned to Philippians 1:15-18. Paul was in prison and wrote of some of the "raccoons" who had been sorting through his trash. "Some proclaim Christ out of envy or rivalry ... others proclaim Christ out of selfish ambition, not sincerely but intending to increase my suffering in my imprisonment. What does it matter? Just this, that Christ is proclaimed in every way, whether out of false motives or true, and in that I rejoice."

Wow. What acceptance he had! I was inspired.

The next Sunday, my sermon was entitled "Raccoons Are Welcome." It was a communion Sunday, and I told the whole story. I encouraged my congregation to let go of what others have done to us. In God's house, raccoons are welcome at the table! If we are bothered that our protagonists are Christians, it helps to remember that Paul's raccoons were not only other Christians, they were other preachers.

On Monday morning, I felt a nudge from the Spirit, as if to say, "Steve, do you believe what you preached yesterday?" I pulled out a file of old letters and emails from those occasional conflicts. Why was I holding on to these raccoons?

On top was a more recent letter, so I thought, "I'd better keep this one, just in case." Laying it aside, I took the file and headed outdoors. One by one, I read each letter to remember. I burned each one as I prayed for forgiveness. I found such release as I poked through the smoldering ashes of my past pain.

After while, the Spirit nudged again. What about the letter still in my desk? No, I might need it. But why not let it go? I sat for a long time in the quiet, internally debating over the one that was left.

Suddenly, I heard a rustle. I opened my eyes. There in broad daylight, just 30 feet away, was a raccoon. He looked at me quizzically. After a few moments, he turned and meandered through the trees. Astounded, I thought, "God, you have a sense of humor."

Needless to say, I burned that last letter.

For years, I have told this story in one form or another to encourage people to find forgiveness. I have discovered that people that drive us crazy are a gift, for they keep us humble and teach us to let go.

Several years ago, I wrote a devotional about the raccoons for a periodical called The Upper Room. Months after I was notified of its acceptance, the morning of its appearance in the magazine arrived without notice.

I got a call in my office. "Is this Steve West?" "Yes, it is," I said. "Is this THE Steve West? The one who wrote about the raccoons?" I suddenly remembered that today was the day. "Why yes, it is."

The woman sighed with relief, "I have been calling everywhere to find your number." She was from several states away. "I had to tell you what happened to me this morning. My daughter is going through a nasty divorce. Her husband has been terrible to her, and it has driven both of us crazy that he acts this way and yet says he's a Christian.

"This morning, when I read your devotional, I just couldn't believe it. I immediately went over to my daughters house, and we laid in the floor while I read the devotional to her. We cried and we cried, and we forgave him for all he had done." "Wow," I said, "I'm so honored that you are telling me this."

"Oh, you don't understand, that's not all," she said. "Here's what's so strange. Her ex-husband's last name is COON!"

Steve West is a husband, father, minister, musician, and writer who pastors Arab First United Methodist Church. His blog, "Musings of a Musical Preacher," is found at stevewestsmusings.blogspot.com.
Posted by musicalpreacher at Thursday, July 30, 2015