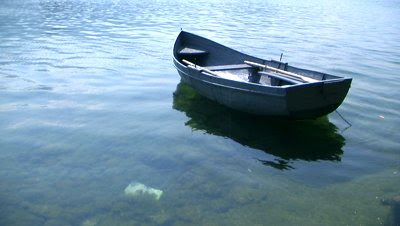 This is my column that appeared in The Arab Tribune on Wednesday, September 2, 2015.

I enjoyed writing this story down for the first time!

When I was growing up in the years around kindergarten and first grade, my family lived in Sheffield, Alabama. I had older brothers, but I was the one folks remember as the toe-headed kid running around the church my father served.

We lived in the church-owned home on a cul-de-sac on Rivermont Drive. Behind our houses, back in the woods and down the slope, was a large creek.

Amy and Becky were my friends. They were the two little girls that lived across the street, and we always found something to do.

Playing down in the woods by the creek one day, we came upon a little fishing boat tied to a stump. And that was the beginning of the great fishing boat caper.

Every day, we would go down to the boat and untie it. One of us would hold the rope while the other two climbed in the boat. Then we would trade places. I have no idea how many times we did this, but boy, it was fun ... until the day one of the girls dropped the rope.

I can still visualize her scrambling to take hold of it before the boat drifted to the other side of the creek, with Becky and me in it. It lodged into a grassy area on the other side, but it was nowhere near the other shore. I did not know how to swim yet, and there was no paddle in sight. Oh dear.

My parents were going to find out, and all I could feel was the shame. Amy ran to get help, and help did come. My memory is fuzzy on how many people came to the shore and how long it took them to come up with a plan.

But what I vividly remember is the little motorboat coming up the creek to save us. Here we were, lost in our fears, and a young man appeared in the distance with the buzz of the motor behind him.

I've never been so glad to see a motorboat, before or since. It was as if Jesus himself was parting the waters, with a divine glow about him and heavenly music playing in the background. With no hint of judgement, and a smile on his face, this man came and took us to a place of safety.

In the years since, I've laughed that as a kid I was smart enough to know it's easier to get forgiveness than permission, but was just not wise enough to leave the boat tied up to the stump.

But I've never forgotten the joy of that moment when I saw the motorboat coming.

All these years, I've pondered what a Christ figure he was for me. Here I was, wallowing in my shame and fear, but he offered no condemnation and no harsh words. He just smiled and invited me to get in the boat.

Jesus is the one who comes.

Steve West is a husband, father, minister, musician, and writer that pastors Arab First United Methodist Church. His blog, "Musings of a Musical Preacher," is found at www.stevewestsmusings.blogspot.com.
Posted by musicalpreacher at Thursday, September 03, 2015