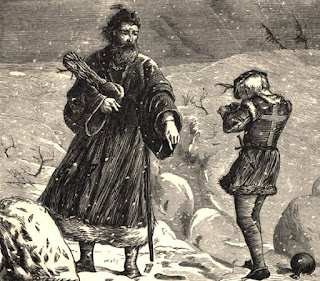 This is my column that appeared in The Arab Tribune on Saturday, December 26, 2015.
My name is Stephen. My aunts and uncles, and some of my cousins, have always called me that.

It wasn't until eighth grade, when the Six Million Dollar Man's opening sequence on TV resounded with the words "Steve Austin, astronaut, a man barely alive", that I informed my family I was to be going to be called Steve from now on. What can I say, it was more "cool."

Now, sometimes I ponder the origins of my name. It means "prince" or "crowned", a designation I certainly don't deserve. My wife doesn't appreciate it when I remind her of that, in contrast with the fact that her name means "helper." I'll probably get in trouble for putting that in the paper.

But every year, on the day after Christmas, it's my special day to pause to think of my name. Why? Today, December 26, is the Feast of Stephen.

Most people around here would know who Stephen is. He was the first Christian martyr, as recorded in the book of Acts. He was stoned to death for his faith, even while gazing into the heavens with his face aglow. A young Saul, later named Paul, stood nearby. It's an important part of the early Christian story. Today, when Christians are still persecuted in some parts of the world, we need to remember Stephen.

But most of us probably think, "why do we sing about the Feast of Stephen in a Christmas carol?" There is a long tradition in many places in the world that this day is "box day," a day to care for the poor by boxing up food and gifts for those in need on the day after Christmas.

"Good King Wenceslas" is a carol based on the legend of a 10th century duke, the Duke of Bohemia. He was a saintly monarch who personally cared for the poor and widowed. He was martyred for his faith, and followers kept the stories of his compassion alive.

The carol never mentions the nativity, but it's associated with Christmas because the narrative occurs on the Feast of St. Stephen, December 26. It is a call to follow in the footsteps of the saint, as did his page, in order to care for the poor.

So today, on the Feast of Stephen, let us also think of the poor and needy. As the text concludes, "ye who now will bless the poor shall yourselves find blessing." What a great way to head from Christmas into a new year.

Here is the complete text of the carol by John Mason Neale, first published in 1853. May it bless your day and our many days ahead.

"Hither, page, and stand by me
If thou know'st it, telling
Yonder peasant, who is he?
Where and what his dwelling?"
"Sire, he lives a good league hence
Underneath the mountain
Right against the forest fence
By Saint Agnes' fountain."

"Bring me flesh and bring me wine
Bring me pine logs hither
Thou and I will see him dine
When we bear him thither."
Page and monarch forth they went
Forth they went together
Through the rude wind's wild lament
And the bitter weather

"Sire, the night is darker now
And the wind blows stronger
Fails my heart, I know not how,
I can go no longer."
"Mark my footsteps, my good page
Tread thou in them boldly
Thou shalt find the winter's rage
Freeze thy blood less coldly."

In his master's steps he trod
Where the snow lay dinted
Heat was in the very sod
Which the Saint had printed
Therefore, Christian men, be sure
Wealth or rank possessing
Ye who now will bless the poor
Shall yourselves find blessing

Steve West is a husband, father, minister, musician, and writer who pastors Arab First United Methodist Church. His blog, "Musings of a Musical Preacher," is found at www.stevewestsmusings.blogspot.com.
Posted by musicalpreacher at Saturday, December 26, 2015