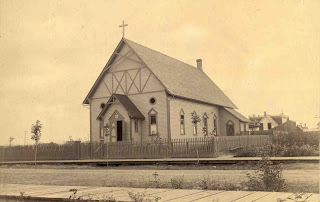 There are times when I'm feeling down or cowering in fear. Times when I'm so challenged by the complexities and mysteries of human relationships that I don't know how I can keep going. Then I remember Grandpa Hamby.

His name was Charles Pinkney Hamby, but everybody called him C.P. In the early part of the twentieth century, he was a fiery young preacher who cared deeply about spreading the gospel under the flag of the Methodist movement.

In the 1920’s, Grandpa Hamby was appointed as "conference evangelist" in North Alabama. His job was to go around the state, lead revivals, and start churches. One year, he was sent to a little town called State Line, Alabama, which is on the line between Tennessee and Alabama, just North of Huntsville. State Line was a bootlegging town. There was an old, white clapboard church building there that had been unoccupied for years, and he was sent to lead a revival and start the church back up.

After visiting folks in the community for a week, it was time to have the opening revival service. With windows open in the heat of summer, a small congregation gathered to worship. But the bootleggers in town did not like it at all. As soon as the service began, they drove their cars up to the open windows of the church, "revved" up their engines, and laid on their horns.
Of course, the service could not continue. Grandpa Hamby had to wrap things up and he told everyone to come back the next night.

He was not about to let the bootleggers shut him down! The next day he went into Huntsville, which was the county seat, to be deputized. When you were deputized in the 1920’s, they gave you three things - a badge, a pistol, and another pistol. The bootleggers did not know what he was doing but they did know where he was. On his way back to State Line, he encountered a roadblock to keep him out of town. But after he swung his pistols around a little bit, they moved out of his way.

By the time of the revival meeting that night, half the county had heard about the "pistol-swinging preacher"! The little place was packed. There were people standing in the back. There were people outside sticking their heads in through the open windows.

My grandfather was a short little man. He walked very slowly and dramatically into the church as a hush began to fall on the congregation. One woman in the middle remarked under her breath, "no short preacher’s going to change this town. Hmph." He ignored it.

You could hear a pin drop.

He began, "My name is C.P. Hamby and I’ve been sent by the Methodist Episcopal Church, South. I've been asked to lead a revival and start a church in this town. And I heard what you said lady," he said strongly, pointing to the woman in the center aisle. "This short preacher can’t change this town, but God certainly can! And if you don’t believe me, I have two boys up here, and each of them speaks six times. I’d be glad to have a conversation with you!"

That began a week in which thirty bootleggers gave their lives to Christ! The church has been going ever since. It eventually relocated but is presently called Genesis United Methodist Church in State Line, Alabama.

Times have changed since the 1920’s and methods are no longer the same. I certainly would never want to mix guns and religion. But whenever I get discouraged, or feel like I can’t muster up the energy to do what God calls me to do, I remember Grandpa Hamby. He risked his life because he knew the gospel was worth dying for. The fire in his soul was stronger than the fear in his heart.

If he could do that, I can do this. Whatever it is.