Discovering My Wills and Thompson Ancestors 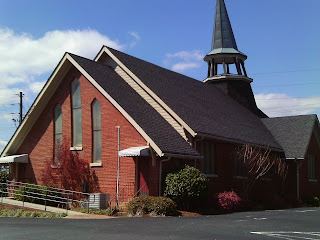 Discovering my ancestors has been an amazing journey. Last week, I gave my dad the gift of getting in touch with his own heritage. I took him on a graveyard tour of north Georgia and showed him 26 graves of our ancestors. It was a mystical whirlwind, an adventure I am still unpacking from emotionally and spiritually.
One of the highlights was going to the Midway UMC in Cumming, GA to trace Virginia Wills West’s heritage. She was Dad's grandmother. Her parents, John and Sarah Thompson Wills, are buried there. In addition, both sets of their parents, Mastin and Susan Spruce Wills and James and Martha Garner Thompson, are buried. Both sets of Dad’s 2nd great grandparents were charter members of the church, which is indicated on their gravestones. 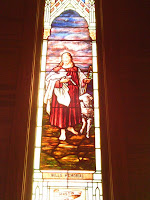 Midway UMC is a growing church with new buildings but they have a historic chapel pictured above. It was an awesome experience to see the Wills Memorial window. I did not realize until we got there that it was the most prominent window of the chapel, the highest in the center. The names of Maston Wills (Dad’s 2nd great grandfather) and his three sons, John (our ancestor), William, and Andrew, are in the window itself. It speaks volumes of their deep roots here in this church.
A real serendipity was going up to the main office and new sanctuary and suddenly noticing the stone memorial embedded in the brick by the door. It lists Harrison Wills first among the names the building was built in memory of. Harrison was Virginia Wills West’s brother, Dad’s Great Uncle. This spurred wonderful conversation about Dad’s memories of Uncle Harrison. 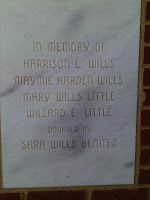 He told me about Uncle Harrison taking him a couple of times to the Indian Springs Camp Meeting, the largest camp meeting in Georgia, when Dad was a teenager. This was probably around 1945, and I enjoyed hearing about the sawdust floor and piano under the open air chapel. Dad could even remember the three points of the preacher's sermon one of those days on the text “Prepare to meet thy God” ... 1) There is a God, 2) You will meet him, 3) You'd better get ready!
Dad has another story I will share about Uncle Harrison. I share it in Dad's own words:
"As a youth I went with my father to visit his uncle, Harrison Wills. One of the stories I remember Uncle Harrison telling was that when he, in his retirement years, decided to sell of his chicken houses and much of his land, he advertised the sale in the Atlanta papers. A group of business men came to look at the property and purchase it. One of them said, 'Where did you acquire all of this? Did you inherit it?' He replied, 'Let me show you where I got my inheritance.' He drove them down to the little church in which he had been raised, took the key from his pocket, and ushered them inside. Pointing to the altar rail at the front of the church, he said, 'This is where my inheritance came from. I can remember that my father brought me here as a child, knelt at the altar with me, put his hands on my head, and prayed that I would be the person God wanted me to be.' He concluded, 'I can still feel the hands of my father on my head'."
That chapel would be the original building built earlier on that same site. I took a picture of that original chapel that was in the office of the church. That father who laid his hands on Harrison would have been John Wills, memorialized on the window. 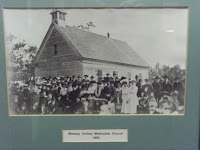 Posted by musicalpreacher at Monday, April 04, 2011