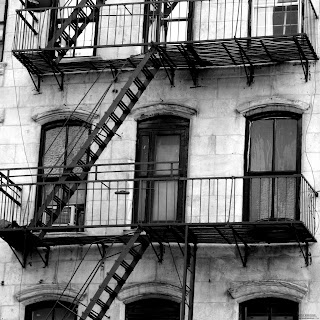 This is my column which was published in The Arab Tribune on Wednesday, August 31, 2016.

My mother was a really organized person. She orchestrated our family reunions, she kept a list of who was getting what from whom for Christmas, and she added a little order to my life when I needed her to. Yes, I was a teenager once.

After she and Dad retired, they enjoyed several years of traveling. It seems like they went everywhere. They scoured the United States. They coordinated overseas trips and cruises.

But my mom had a funny little habit. She was so organized that whenever they arrived at a hotel, the first thing she did was go through her mental checklist. On that list was finding the fire escape. She had to know, just in case.

One time when they were on a trip, in her usual fashion she went on her quest to find it. A small door on the end of the hall looked like it might be the right one. She opened it to take a look.

There, inside the door, was a man in the bathroom. "Oh, my goodness, I'm sorry," she said. "I was just trying to find the fire escape."

She quickly closed the door. Red as a beet, she headed down the hall toward her room.

Perhaps she shouldn't have been so surprised that a few minutes later, down the hall came that man with a very fast pace, frantically pulling up his pants. "Where's the fire? Where's the FIRE?"

It's the question we still ask. Where's the fire, when we feel like our flame just fizzled out? When we are tired or a little bit depressed? When the things we once believed in so passionately don't seem to work for us anymore?

One of the simplest pleasures I have always loved is a campfire. I love to build it, I love the careful tinkering of getting it started, and I love hoping it "takes". I love the thrill of watching it finally burst into flames.

I love to feed the fire, to be warmed by the fire, to roast marshmallows on the fire, and to smell the hot dogs sizzling in the fire. I love the taste of the charred, gooey white sugar and the crunch of the toasted bun around that meaty frank.

Sometimes I go camping without one, and it's just not the same. I lay awake in the cold night air, thinking "why didn't I just go ahead and build a fire?"

That's because there is something about fire that gets you in touch with what it means to be deeply human. After all, the campfire is where social life began. It's where song, story, dance, and ritual got its beginnings.

Thousands of years later, we still gather around the fire and we call that "worship." Yes, maybe a good old fashioned campfire rages more than a candle gently placed on the altar, but either way it warms the heart.

We still gather around the fire to sing the song, to tell the story, and to join the dance of the soul. It's ritual behavior at its best. And we don't do ritual just because we are Christian, or even because we are religious.

We do it because that's what it means to be human. And that fire is the fire of the Spirit.

Steve West is a husband, father, minister, musician, and writer who pastors Arab First United Methodist Church. His blog, "Musings of a Musical Preacher," is found at stevewestsmusings.blogspot.com.
Posted by musicalpreacher at Saturday, September 03, 2016