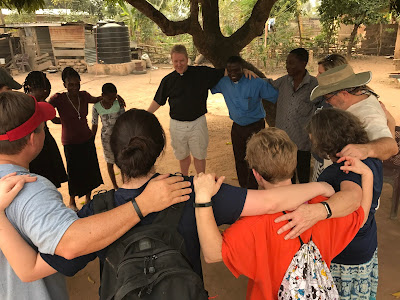 This article was published on the front page of The Arab Tribune on Saturday, January 28, 2017.

There is a turn of a phrase in Ghana that catches me by surprise every time I hear it. When greeting those of us who are traveling from the states, Ghanians say "You're welcome." The customary response to this salutation is "Thank you." It seems quite backwards, but it makes perfect sense. When we go, we feel welcome indeed.

During the New Year holidays, a team from Arab First United Methodist Church went to Ghana for the second year in a row. It was a week full of joy, sharing with our brothers and sisters in Christ.

We visited the Eugemot Orphanage near Hohoe, in the Volta region of Western Ghana. It is a four hour van ride from the airport in Accra, which is quite an adventure on less than perfect roads.

Each day we would visit the orphanage and spend time loving the children. Game and play time with the kids was the highlight of each day. We got to see the completed barn that we financed and began construction on last year, and we helped out on the farm to begin filling it with its first crops of rice and corn.

Our main project this year was to upgrade the water system and help restore the foundation of the Peggy Good School on orphanage property. The new underground water pipes to the dorm which we financed was complete. We worked on the foundation and left enough money to finish that out, as well as replace the windows and doors to the school.

We also had opportunity to go into the villages and bring food relief, mosquito nets, water filters, and a little money to help families in need. Local pastors identified these families for us and went with us to visit them and pray. One of the families we visited was the home of one of the former orphans we knew.

New Year's is a big holiday in Ghana, more so than Christmas. It's a time to look back on the year in gratitude and look forward to the fresh start of a new year, a "Thanksgiving" of sorts. There are religious services everywhere.

New Year's Eve at the orphanage was a grand feast. There was music, food, and fun. The children shared memory verses and dances to entertain and bless us. Older youth who were away at school were home for the weekend and spoke to the younger orphans words of inspiration and hope. Afterward, there was a huge bonfire with hours of African drumming, song, and dance.

One of the highlights of my life was being invited to preach the sermon at the local Methodist Church in Hohoe on New Year's Day. The service began with a sparse crowd, but by the time I preached, the place was packed. Just before the service, the pastor leaned over to me and told me I would be familiar with the full Methodist liturgy but that I could expect "moments of African spontaneity" as well. And there certainly were.

The choir was dressed in robes and mortar boards, resembling graduation. There were several hymns and scriptures, four offerings brought forward, and two extended praise singing times (complete with drums and dancing in circles). My preaching was translated into Ewe (the local language), and after serving communion, we gave the church a gift for their local ministries.

They sent us out in appreciation and kept on praising with trumpet, drums, and dance as they received their final offering of the day with seven basins ... each person was to place thanksgiving offerings in one of the seven, according to what day of the week they were born. Apparently, everyone in their culture knows the day they were born on because they grew up with a special family nickname because of the day.

As we stepped out, they were planning on another sermon and a luncheon after our departure. The service had started at 9:00 a.m., and we left the service early at 12:30 p.m. Times really does fly when you are having fun, and for African Christians the whole day belongs to the Lord. What an experience of vibrant and beautiful faith.

Leaving the orphanage after our week of working, playing, visiting, worshipping, and giving was hard ... and this was the second time around for me. Yet smiles and joy pervaded the place as we got back on the van one last time for the four hour journey to a much longer flight home.

I used to think that the purpose of overseas mission work was to go and share Jesus Christ with others. I have since realized that we don't bring Jesus, because Jesus is already there. We go to discover him where he is already at work, and get a chance to join him for a while.

I was incredibly touched by the simple and passionate Christian spirituality of the people of this third world country, where it is quite common for local businesses to have names like "God is Great Beauty Salon". We went to give, and received so much more from the experience.

Members of the mission team were Robert Burton, Brian O'Dell, Lois O'Dell, Jill Hinds, Josh Millwood, Caitlyn Scarborough, Marc Scarbrough, Hannah Shirley, Lisa Sloan, Tarah Sloan, and Steve West. Leslie and Lianna Smith were planning to go, but were unable to attend because of a family funeral. Dawn Liebner, Joy Privett, and a number of others from our church kept the trip surrounded in support and prayer.

The team will be sharing a dinner and trip presentation on Sunday, January 29, at 6:30 p.m. in the Arab First UMC fellowship hall. Free-will donations will be accepted toward next year's mission trip. The public is invited and no reservations are required. I hope to see you there. 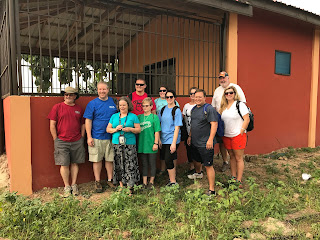 Steve West is a husband, father, minister, musician, and writer who pastors Arab First United Methodist Church. His blog, "Musings of a Musical Preacher," is found at www.stevewestsmusings.blogspot.com.
Posted by musicalpreacher at Friday, February 03, 2017