Ghana Always Teaches Me Something New 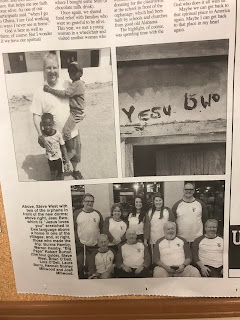 This is my column which appeared on February 2, 2019, in The Arab Tribune.

It was my third trip to Ghana, and I guess that means it’s becoming a habit. If you do something once, it can be a fluke, and if you do it twice, it’s still just a pattern. But going to Ghana has now become a habit indeed, and it’s a holy habit I’m glad to have.

In one way or another, the church I serve has supported the Eugemot orphanage in the Volta Region of eastern Ghana since it was founded fifteen years ago. But four years ago, the Spirit led us to organize an annual mission trip to put some hands and feet to our prayers and support. I personally got to go on three of the four. Our last mission team came home just a couple of weeks ago.

I thought I had learned what there was to learn on my other two trips, and I was there to support the others like a good pastor should. But as usual, I was wrong.

The newly found wonder I brought back with me this time is capsulated in one simple prayer. One of the older orphans who had been away at school came home for the holidays and went with us to guide us on our tour of the waterfall for our Sunday afternoon Sabbath time. He met our team for lunch beforehand, and we asked him to pray. He paused and told us he would like to teach us the prayer Mama Eugenia had always taught them at the orphanage.

I have never heard such profound simplicity in prayer, which reflects amazing trust in the very presence of God in our midst. Yes, we know God is the one from whom all things come.

In the churches in our country, we had just finished the busy Christmas holidays honoring Jesus our Emmanuel, which means “God with us.” And our prayers are usually (if we are honest) asking him to bless what we are doing ... from far, far away.

Not that day. Not Bless (that is the young man’s name). He prayed to the “God who comes”, as Christian spiritualist Carlo Carretto describes it. God is a God who eats with us, who sleeps with us, and who holds us close.

As I reflect on the trip as a whole, I suppose that simple, beautiful prayer has become a prism through which I observed the beautiful colors of gratitude in the hearts of these people. They are thankful for the One who eats and sleeps with us, present in the rhythms of every day.

There is something about stepping out of my own culture, and into another place, that helps me see faith come alive. As one of our participants said, “when I go to Ghana, I see God working in ways I never see at home.”

God is here as well as there, of course. But I wonder if we have our spiritual antennas up to detect God’s presence. All of the experiences of this year’s mission trip led me back to this basic truth that Ghanians know in their bones. God is real and God is present.

We were there during the holidays, and while Christmas is less of a fuss, their New Year has energy like an American Thanksgiving, except it’s even better. They thank God over and over for the blessings of the past year, and they ask God to be with them this coming year. Most churches offer Watch Night services that go on for hours up until midnight.

At the orphanage, we built a big bonfire and enjoyed a drum circle, with dancing and singing that takes me to yet another place of heavenly bliss. On New Year’s Day, everyone wears white and we have a great feast, with traditional rice dishes and barbecued meat. The orphanage puts on a show, with memory verses, dances, and encouraging testimonies by some of the older young women and men who have come home.

What I began to see this year is that this gratitude is not just about the holiday; it’s imbued in everyday life. One young woman showed us the river where her family in the village washes their clothes, washes themselves, and gets their water for cooking and drinking.

Once again, I noticed local shops and businesses out on the road, which have openly religious names like “Salvation Mini-Market” where I bought some Milo (a chocolate milk drink). Once again, we shared food relief with families who were so grateful to be alive.

This year, we met a young woman in a wheelchair and visited another woman who could walk again after many years. We celebrated the story of how prayer had healed her. One of our participants gave the woman her metal cane to replace the hand made wooden stick she was using to show us the glory of what God can do. It was inspiring.

We visited churches that were so incredibly hospitable toward us. One was simple and beautiful, made of wooden slats and a thatched roof. In another, they recognized me from when I preached there two years ago and ushered me up to the stage to sit behind the pastor while he was preaching. Then the pastor introduced me (this was a really strange experience, since I had never met him) and I offered a gift for the new mission house they are building.

They treated me as if I honored them with my presence, but I’m the one that is honored. I get to worship with a faith family that is alive with song and drums and dance.

I was really excited about seeing the new orphanage, finally. The dorms had been under construction by work crews from England for years, while the orphanage had been in a three bedroom rental home down the road. Children had spent years stacked like sardines, but now there was spacious room.

It was heartwarming to see a vision become reality, to see the barn we built for them in view just behind the new orphanage wall, and to watch the running water we helped pay for in use. We watched them installing the new whiteboards we were donating for the classrooms at the school in front of the orphanage, which had been built by schools and churches from good old Alabama.

The highlight, of course, was spending time with the orphans themselves. One little boy just couldn’t get enough of my sunglasses and didn’t mind posing for pictures when he looked so cool. We played card games, did crafts with beads, and tussled with the little ones.

This year, there was a piano in the new common room, so I was in my element and we sang some songs. I got to connect at the keyboard with one of the school officials, who was a church music director on the side and asked me to play hymns he had been learning. Mama Eugenia’s son and one of the older girls were wonderful at harmony. The kids just sang and sang.

All these experiences that unfolded during the week were wrapped up together in that simple prayer that kept mulling around in my mind. Father, we invite you to sing with us, to play with us, to work with us. You are here. We depend completely on you.

I brought home another Gye Nyame, a West African symbol which means “except God.” For them, it is a national symbol. It means we could never have what we have, or do what we do, or be who we are, except for God. “Except God.”

I’m looking at one on the wall in my home as I write. Gye Nyames remind me that in so much of American Christianity, we only consider ourselves somewhat dependent on God. It’s up to us to make a difference, rely on our smarts, and pull ourselves up by our own bootstraps. Then we pause to trust God for the rest.

But not in Ghana. God is a God who does it all with us.

Steve West is a husband, father, minister, musician, and writer who pastors Arab First United Methodist Church. His blog, “Musings of a Musical Preacher,” is found at www.stevewestsmusings.blogspot.com.
Posted by musicalpreacher at Monday, February 11, 2019