Jesus Got an iPhone for Christmas 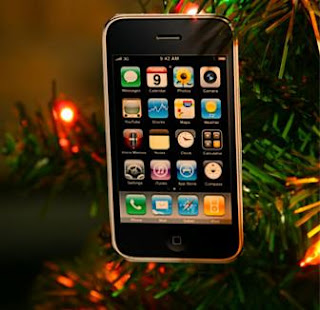 Every year, something whimsical delights my soul during Christmas. It is as if something random and not-so-sacred becomes a window showing me the true light of the season.

This year, it happened at the Living Nativity at the church I serve. This was my maiden voyage with a Living Nativity. I was learning how to be the backstage manager, running lights and directing the cast into their places. A recording of the Christmas story played over the radio as the people came in drive-in theater style.

The youth and the children did a great job. It was one of the adults that gave me trouble! One was recruited to help out as a wise man. He got to the entrance door behind the manger, and suddenly looked at me in surprise. "I don't have a gift!" He asked if I had it. We joked that he came to the party empty handed. I explained that the gold, frankincense, and myrrh were back in the dressing room in the church building. "I'll go get it", he said.

"Um, I'm afraid you go in about 20 seconds from now, so there's no time." He puzzled for a moment and then his face lit up. He reached into his pocket and pulled out an iPhone. That would have to do. I said "hold it up like this," lifting my hands as if holding something quite precious.

So he went into the manger holding up his iPhone in reverence, knowing that its weight in gold would have been a valuable gift. When it came time to lay the gifts before the baby Jesus, he laid it down beautifully.

That's how Jesus got an iPhone for Christmas.

Christmas isn't about giving the "right" gift. It's not about "getting it right" at all. It's about doing what we can, as human as we are, and giving what we have anyway. It's about the little drummer boy.

We'll never "get it right." Thank God that Christmas is not about giving the right gift at all ... it's about God's GIFT of salvation.

If it were up to us, we could never fix the broken world. We tried to save ourselves for generations and it never worked. All of our great ideas to fix things just end up making a bigger mess. So a great miracle happened.

God didn't just "come up with a good idea". God CAME. He dwelt among us and the simplest things became sacred. The incarnation makes all the difference.

It's funny how an iPhone in the manger scene reminded me of the power of the incarnation.
Posted by musicalpreacher at Monday, December 26, 2011