So You Had a Special Needs Infant ... 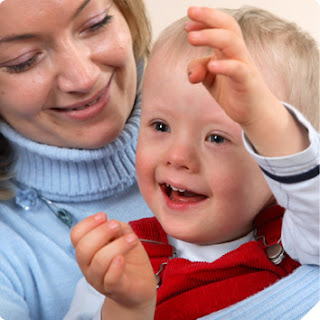 A former parishioner published an article and sent it to me in gratitude for pastoral care I was able to offer when she and her husband began the journey of having a special needs infant. With her permission, I share it with you.

It is a powerful witness for those who are finding hope at the early stages of such a pathway, and for anyone who knows the way of grief or depression. God is good and can see us through things in a way that helps us to see things with new eyes ... with the eyes of God.

The author is Penni Grant.

My daughter has special needs. One more time. My daughter has special needs. It took me a long time to be able to say that without crying. When Sarah was born she was taken to the neonatal intensive care unit (NICU) at 3 days old and stayed there for almost four weeks. She had low muscle tone and a feeding tube because she wouldn't eat. At two weeks old her test results confirmed that she had Prader-Willi Syndrome. It's a fairly rare chromosome disorder with the main symptom being extreme overeating later in life. There are no physical characteristics of Prader-Willi that could be detected in the womb so when we heard all of this we were in shock. I should say extremely shocked.

When you have a special needs infant, you will go through so many emotions you won’t know how to feel from one minute to the next. You will have sorrow, happiness and guilt in a matter of seconds. You are grieving. No matter how strong you think you are, you will grieve and will go through the grieving process in some form or fashion. You will wonder how this happened to you. You will wonder how you became one of “those” families? The families you felt sorry for and were secretly so happy it wasn’t you. The life you had envisioned for your baby is gone and you will be devastated. But, your baby is perfect…you will see that later.

Everyone handles tragedies in different ways, but the basic stages of grief that the majority of the population experience are: Denial, Anger, Bargaining, Depression and Acceptance. Whether you will go through this yourself, have been through it or know someone who will go through it, please help them through it! If you notice that they get stuck at a stage then encourage them to get counseling. My pastor counseled me and after I talked to him and realized what I was going through, it helped immensely.

I went through this stage in the very beginning. We (my husband and I) had genetic testing done because of my age so how could anything be wrong? We had a DNA test that told us everything was perfectly normal! The neonatologist and two nurses told us they thought it was PWS but my husband and I wouldn't believe them until we actually got the test results back. We wanted to believe that Sarah would miraculously recover. We’d walk into the NICU one day and she would be drinking and moving just a normal infant. We got the test results back in 12 days so this stage lasted about that long.

A friend went through this stage in a different way: she didn't want to dream about the future with her new little girl if she wasn't going to get it. But the day she got the diagnosis she hit the ground running with everything she could do for her daughter!

I believe I went through this stage while I was in Denial and Depression. I was angry at other women with normal healthy babies and angry at God. I watched other women leave the hospital with their newborns and couldn’t even look at them. I didn't want to visit my daughter in the NICU because I felt no bond with her at all. Then when I actually did see her I felt guilty for not wanting to see her. I could only hold her certain times of the day and I couldn't stand holding her limp body while she "ate" as breast milk went down her tube. It was not the bonding I had dreamed of for nine months! And because I didn’t want to see her in the NICU I felt guilty and depressed.

I went through this stage through the whole experience. I am a Christian and deep down I knew that the God I believe in doesn’t bargain. But I did keep wishing that life was different. I looked at pictures when I was pregnant and kept thinking, “This is when we were happy. When we thought nothing was wrong and she was going to be normal.” Then I would get sad and depressed, which leads me to the next stage.

This is the stage that I lingered in a little too long. I couldn’t see the good in any of this. I could only think about what Sarah wouldn’t become, about things that she would never be able to do. I was devastated and saw other friends with their normal, healthy babies and was angry again. I cried all the time and found no joy in anything.

Not all the friends I talked to on our social networking site needed medication or counseling, but all went through this phase of the grieving process.

I have 2 friends and myself included that admitted to thoughts of killing or harming the baby. We all agreed that a baby hooked up to tubes and wires that is in an incubator is very hard to bond with. I actually thought about how easy it would be to put a pillow over her face in the NICU. The scary part is that I started to justify how it would be better if Sarah did die. I knew that what I was feeling made me feel guilty which spiraled me into a sadness I didn’t recognize. How could a mother feel like that about her child? It wasn’t until I talked to the social worker and one of Sarah’s NICU nurses that I realized I might have a problem. They obviously saw something I didn’t and suggested I talk to my OB/Gyn. The next day I saw her and filled a prescription for an antidepressant. In a couple of weeks with a couple of visits to my pastor the fog slowly started to lift.

For me, acceptance happened gradually but for others it may happen in an instant. I started to slowly work my way out of it when Sarah came home from the NICU. There was one thing my husband said to me that also made me realize that things weren’t so bad. He told me, “You are concentrating on what she can’t do, she will be able to do a lot of things. Don’t condemn her whole life when she’s only 1 month old.” One friend said she realized through friends, her pastor and family that special needs children have their place and purpose in this world also. Another said that it happened gradually for her when her daughter started to interact more with her. She also said that working out a schedule with her husband and family so she could get more sleep was very important. She believed that sleep deprivation was contributing to her depression and sadness.

One thing that most of the women on our social network group said that helped was having a wonderful partner. Spouse, boyfriend, girlfriend, whatever your definition, is so important. Communicate frequently and be open about what you’re feeling. It’s important that you and your partner can talk to each other without fear of judgment. My husband was a rock and we always listened to and leaned on each other. Confiding in our pastor, I told him that I was not handling the situation very well and my husband was handling it so much better. He was upset of course, but never wavered and was always there for our daughter whereas I felt like a big pile of mush. But our pastor wisely stated, “He’s not handling it better, just different.”

Sarah is now 15 months old but it took me 4-5 months to come out of that darkness. I have accepted our new normal and realize now that she is perfect. Of course I still wish that she didn’t have PWS, but I look at her now as a little girl and not just a diagnosis. She is absolutely beautiful and brings out the best in everyone!