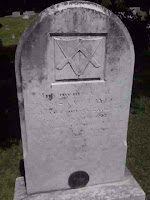 I recently had another opportunity to visit the grave of my great, great, great grandfather, the Rev. Isaac Taylor. He was a Methodist circuit rider and preacher during the 1820's during the early waves of Methodism in Alabama and Mississippi (it was one conference at that time). His body is buried in the graveyard of Taylor Memorial UMC near Trussville, Alabama. The church is named after his brother, Rev. William Taylor, the pastor who founded the church.
It is always a holy moment to stand at his grave, and I do so from time to time. Years ago, I had been praying about some of the difficulties we face in the United Methodist Church, wondering if we would face structural division in my lifetime. I stood at his grave weeping and a wave of peace came over me. It is as if the Spirit spoke, saying "Steve, you were ordained in the United Methodist Church. Your father was ordained in the Methodist Church. Your grandfathers were ordained in the Methodist Episcopal Church, South. Taylor was ordained in the Methodist Episcopal Church. It doesn't matter what you call it. It will never matter how you organize it, for the fire of Wesleyan faith will keep burning." I recalled that during his ministry, the church divided over issues of slavery.
I began a long process of letting go and trusting God for the future. My ministry has been a journey of realizing that I am stepping into a larger picture of the Spirit's movement across many generations. This brings me great peace and a sense of context. It is not up to me to fix the larger issues. It is my calling to serve the gospel faithfully and trust God for the rest. The future belongs to God.
His grave stone reads:
In memory of
Rev. ISAAC TAYLOR
was born January 27th, 1802
died May 5th, 1871
He was a minister of the gospel 50 years
and died in the hope
& Consolation of the same.
---------------
"Blessed are the dead
who die in the Lord." 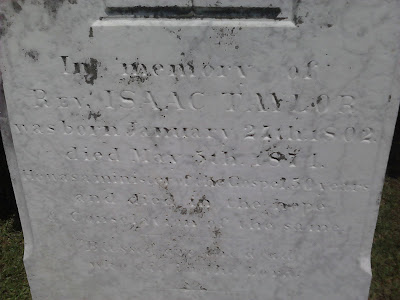