When God Comes Near 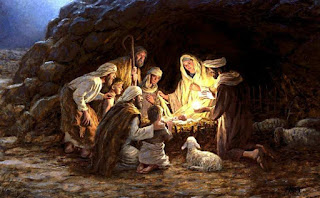 This is my column which appeared in The Arab Tribune on Saturday, December 23, 2017.

A number of years ago, long before blogging and social media were something I could imagine (but after email and fax machines were born ... I’m not ancient you know), I figured out how to make my first group list with an email address book.

Woah. This group email thing was new and unheard of technology. Yes, this story ages me, but it was then that I started sharing some devotional writings.

They certainly weren’t the length and breadth of the columns I try to write today, but it was a start. I began with a one-pager called “Faithclick” which went out every week or two.

One year, I got a call from a Birmingham newspaper, asking if they could quote my Faithclick in a piece they were doing on Christmas. I wasn’t even sure how they had gotten hold of it. I was honored and said “sure!”

Little did I know the editor was doing an op-ed piece to starkly contrast my thoughts with that of another pastor. I had no idea what I had gotten into.

The experience is etched in my memory as a reminder of not only the value of diverse faiths but of my intense commitment to the mystery of Christmas.

The other pastor’s point of view was that Christmas was not important. Salvation came through Christ’s crucifixion and resurrection, not his birth, he argued. So the only holiday that was important was Easter.

My point of view is that Christmas is the great feast of the incarnation. The incarnation is that divine-become-human miracle that changed the world as well as the trajectory of salvation history.

Of course the crucifixion and resurrection are incredibly important, and my claim on Christmas is much more than a banal reminder that if Jesus had not been born he could not have died.

Christmas is much more than a birthday party for Jesus. It’s not even his birthday, since we have no idea when that was! Christmas is a feast that beholds the incredible miracle of the Word becoming flesh and dwelling among us. The incarnation, crucifixion, and resurrection are a divine trilogy, if you will, of events of salvation significance. To leave the incarnation off the salvation menu is to abandon the great miracle of God crossing over.

I believe the incarnation is what is most distinctive and unique about Christianity. Other religions believe in one true God, in sin and grace, in prayer and holy writings, in the redeeming quality of suffering, and in loving God and neighbor. But no other historic world religion believes that God became human. In fact, this is the key offense other religions have against it.

Jesus was not just a teacher or prophet. In him we behold God’s glory. God crossed over to us because we can’t on our own cross the bridge to God. No amount of effort or religiosity or right living or correct doctrine can save us. So God came. What a strange way to save the world.

The incarnation is so integral to our faith because this miracle is the nest in which Christ’s life, death, and resurrection are born. And it has a huge impact on Christian spirituality.

Christ is still alive and present, a truth that is confirmed by the victory of Easter. His presence is in the world and the Church is his body. He is the living Word. It’s the reason the virgin birth is so important in the scripture’s narrative.

It’s the reason that in the wisdom of the ancients, folk winter festival traditions were adopted to serve the greater mystery. If you ever get frustrated by the secular and cultural aspects of Christmas or bend to the temptation of believing we are in some sort of culture war, remember that this festival adopting secular enhancements was a choice made long ago. It’s a reminder that the sacred and secular are not entirely opposite.

Just as the divine became human, the human can still point to the divine. This is incarnational spirituality.

I’ve always believed Christianity is something you follow, not swallow. To follow God’s lead, a key feature of our faith is to develop new eyes with which to see God in our midst.

I know Christmas is hard for some, especially for those who are grieving. There can be tears during this season.

Yet in our sorrow, may we know Christ is present. This is because God is, as Carlo Carretto famously said, “a God who comes.”

C.S. Lewis is well known for being a skeptic who, after years of intellectual struggle, converted wholeheartedly to Christianity. He noted many times that what really sold him on Christian faith was the incarnation. He wrote, “It is Christ Himself, not the Bible, who is the true word of God. The Bible, read in the right spirit and with the guidance of good teachers, will bring us to Him. We must not use the Bible as a sort of encyclopedia out of which texts can be taken to use as weapons.”

This year, take some time to come home to the miracle of the incarnation. It’s time to stop using religion to support our pre-set opinions and prejudices. Let the incarnation wash over you.

Let Christmas be a holiday for you in the true sense of the word, because a holiday is a “holy day.” Take some time to pause, to reflect, and to be silent ... not just because you need to collapse every once in a while because of all the shopping and parties. Do it because you are intentionally building the beholding of a mystery into the midst.

Steve West is a husband, father, minister, musician, and writer who pastors Arab First United Methodist Church. His blog, “Musings of a Musical Preacher,” is at www.stevewestsmusings.blogspot.com.
Posted by musicalpreacher at Sunday, December 24, 2017