There's more than one way Christ comes to us 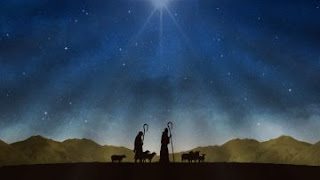 This is my column that appeared in “The Arab Tribune” on Wednesday, December 19, 2018.
Every year during the holidays, it seems that one story, one experience, or one conversation captures my imagination. It's not usually any of the gifts, or all the food (as much as there is of that to be impressed by), or the lights or the parties.

It's something unusual, something unexpected, and something a bit heart-warming. This year, it was a phone call.

Last Saturday, our church held our annual "Christmas and Beyond" party where we hosted most of the 150 children and their families that we help with Christmas. We had done all the shopping in advance, so we shared a Christmas program of songs and games, treated everyone to breakfast, and opened a Christmas thrift shop for their families to enjoy.

When it was all over, I got a phone call from one of my parishioners with a story I'll never forget. During the morning's activities, a grandmother who had brought her three grandchildren to Christmas and Beyond told a story to the volunteers who were fixing her coffee.

She said that the night before, her two nephews, who are ages 21 and 23, were at her house, and they asked her grandchildren what they were going to do on Saturday. The kids said they were going to a "Christmas party" at the Methodist church.

The nephews replied, "Oh, you will have a great time! We went there when we were your age, and they made us pancakes, and we heard the Christmas story, and everyone was so nice to us! You will love it!" One of the nephews said "It is my favorite Christmas memory!"

This brings a little mist to my eyes. As if that is not heart-warming enough, the grandmother continued, "You may not realize it but this party has a lasting impact and this is proof. Twenty years later, my nephews still remember your kindness." That's the best phone call I've gotten in a long time.

I love the Advent season. In my faith tradition, it's a four-Sunday season of expectation of the coming of Christ. The little Christmas surprises ... the serendipitous, heart-warming moments ... have grown to be something I expect.

I try to keep my spiritual antenna's up to see where God is going to show up. That's because there's more than one way Jesus comes.
I shared with my congregation that I have recently discovered the teachings of a 12th century French abbot named Bernard of Clairvaux, who said something to ponder during this holy season. He said there are really three "comings" of Christ.

The first was Christ's coming in the flesh. The second will be his coming again in glory. But there is one "coming" in between, his coming into our hearts.

Here are some words from his sermon: “We know that there are three comings of the Lord. The third lies between the other two. It is invisible, while the other two are visible. In the first coming he was seen on earth, dwelling among humans; he himself testifies that they saw him and hated him. In the final coming all flesh will see the salvation of our God, and they will look on him whom they pierced. The intermediate coming is a hidden one."

He continues, "In the first coming our Lord came in our flesh and in our weakness. In this middle coming he comes in spirit and in power, in the final coming he will be seen in glory and majesty. In case someone should think that what we say about this middle coming is sheer invention, listen to what our Lord himself says; ‘If anyone loves me, he will keep my word, and my Father will love him, and we will come to him’.”

It is this "middle coming" that seems to show up again and again for me during this season, sometimes when I least expect it but I try to always be looking for it. Because it lies between the other two, it is like a road we travel on from Christ's first coming to his last.

As Bernard put it, "In the first, Christ was our redemption; in the last, he will appear as our life. In this middle coming, he is our rest and consolation.”
Let him come into your heart today.
Steve West is a husband, father, minister, musician, and writer who pastors Arab First United Methodist Church. His blog, “Musings of a Musical Preacher,” is found at www.stevewestsmusings.blogspot.com.
Posted by musicalpreacher at Friday, December 21, 2018