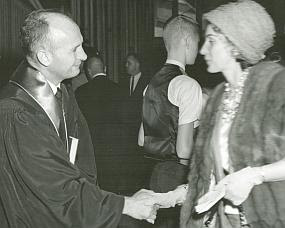 I am posting this on the day of my Uncle Warren's Memorial Service. The brother of my mother, Rev. Warren Hamby was a very special part of my life and an inspiration to many as pastor and preacher. Here is an inspirational story about his ministry during the Civil Rights movement when he served as pastor of Galloway UMC in Jackson, Mississippi. It is written by my cousin, Warren (Ren) Hamby, Jr.

"There was another instance ... when I found Daddy crouched in the back of our carport after dark, his shotgun on his lap, ready to use it if necessary to protect us. Not long before, a family who belonged to our church were almost killed when a bomb planted by the KKK ripped apart the front of their home. Fortunately, Bob Kochtitzky, his wife, and their infant son had just gone up to bed, thereby escaping death. The following Sunday Daddy read a statement from the pulpit denouncing the violence, proclaiming that those decent, law-abiding, church-going citizens and preachers who remained silent in the face of such atrocities must share part of the blame. His statement was carried in the Jackson newspapers. In Jackson, Missisippi during the 1960s, this was no way to gain popularity.

"I was returning from a date or something like that, when I started to enter our house through the carport door and saw Daddy sitting there in the darkness with his gun. He told me to go inside immediately. He had been seeing cars drive slowly past our house, cutting their lights, once even shining a spotlight into the shrubbery next to the house. Were we to be the next victims of the KKK, because of the statement Daddy had read? I quickly retreated into the safety of our home, leaving Daddy there to defend us. But it wasn't long before Daddy came inside and laid the gun in the corner, appearing quite relieved. It turned out that the cars passing our house were the police. Although we hadn't been told, they were watching our house, along with a number of other possible targets in the city, to prevent further bombings from taking place. Daddy learned this when he bravely approached one of the slowing cars and waved it down to question the driver.

"For years, I remembered this as another example of how my father was willing to lay his life on the line just for our protection. But as I grew older, I began to see the incident very differently. In truth, Daddy had put his family in grave danger. He didn't have to read the statement. We would have been much safer and secure if he had simply preached an old-fashioned feel-good sermon, dismissing the bombing as a fluke tragedy brought about by ignorant extremists who would certainly be brought to justice.