A Look at the Past to Discover the Future (pt. 3) 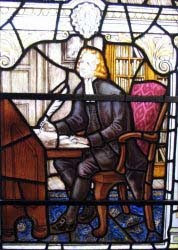 What will our next hymnal be like? This is Part 3 of a paper presented to the NAC Historical Society on the movement of Methodist hymnody in the United States. I've learned some amazing things about the creative tensions of the past that could guide us into the future.

Pictured is a window from Wesley's Chapel in London depicting Charles Wesley writing a hymn.

Wave #1 – The Wesleys and the Proliferation of Hymnals that Followed

Charles Wesley was the most prolific hymn writer of history thus far, writing over 6,500 hymns (some estimate as many as 9,000). Isaac Watts remarked at Charles Wesley's funeral that Charles’ poem, "Come O Thou Traveler Unknown,” was worth all the verses he himself had written. But what many do not realize is that it was John who essentially created the hymnal as we know it. He was a diligent editor and compiler of many hymnals before the denomination was officially born, practicing the editorial license we continue with every hymnal. It’s a good thing, too, or we’d still be singing “Hark! how all the welkin rings.”

As we have noted, England was rather void of contemporary hymns except for the recent works of Watts. The Wesley’s early experiences would have been psalm singing. But John became heavily influenced by the German Moravians’ religion of the heart. He was fascinated with the vernacular German hymn because of the heart-felt, emotive character of their singing compared to the metrical psalmody the British elite preferred. So touched by it, he learned German while still on the boat to America so he could translate chorales! His first hymn book, A Collection of Psalms and Hymns, came out in 1737 (with a second edition in 1738), by a publisher in “Charles-Town” while Wesley was in Georgia. Among its 70 selections were a few of John's own translations of German chorales, as well his adaptations of a number of hymns by Isaac Watts and others. While the Church of England prohibited the use of vernacular hymns in formal worship, Wesley began a history of cautiously introducing them during the serving of communion, in addition to the acceptable personal use outside of services.

You may know that Wesley got into trouble related to Sophy Hopky before shipping off to England for good, the prelude to his Aldersgate Street heart-warming experience. What you may not know is that 2 of the 12 charges placed against him were grievances about his use of hymns in worship. One reads “by introducing into the church … compositions of psalms and hymns not inspected or authorized by any proper judicature.”

After the brothers experienced conversions, Charles became the prolific lyricist. John stayed the main editor and compiler of the movement, though each did some of the other. In 1741, John published A Collection of Psalms and Hymns. He published Hymns and Sacred Poems in 1739, 1740, and 1742, collecting them in 1753 into one Hymns and Spiritual Songs, intended for the use of real Christians of all Denominations. This was the main Methodist hymnbook until 1780, with 24 editions issued. More and more of Charles’ hymns were included. In addition, Charles himself published a number of hymn collections on themes such as Redemption Hymns, Funeral Hymns, and Family Hymns. One of his most important collections was Hymns on the Lord's Supper. Wesley hymn books were the best instrument of popular religious culture Christendom had ever seen.

You may be surprised that both Wesleys played the flute. Charles was a more accomplished musician, training his two sons to become professional church musicians. But John used the flute in field preaching to teach tunes, “lining them out” since tunes were not printed with texts. He was a natural but untrained musician. He would sing lines and have the congregation repeat. The point was to make singing accessible, using simple and common tunes that a congregation could pick up without reading music.

In time, Wesley created tune books to supplement the text-only hymnals, but tune books were only for the musicians. He got material from folk music, pub tunes, Italian opera, and Handel oratorio – the contemporary music of the time! His first was The Foundry Collection in 1742. His words in the preface are entertaining: “I have been endeavoring for 20 years to procure such a book as this. But in vain: Masters of music were above allowing any direction but their own.” His second, Select Hymns with Tunes Annext in 1761, provided melodies in the back and assigned a tune for each hymn.

Wesley hymnals drew great criticism from the institutional church. It produced emotionally compelling, rousing singing frowned on by traditionalists. This fueled the movement because hymns were easy to sing, contemporary to the ear, and simple in language. Many were attracted away from the established church to this modern media phenomenon. We think of hymnbooks as “traditional” now, but at the time they were quite radical. John and Charles published some 65 hymn collections for various times and seasons.