A Look at the Past to Discover the Future (pt. 2) 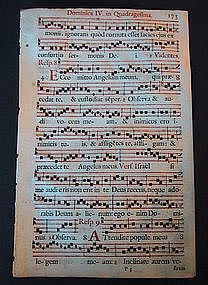 What will our next hymnal be like? This is Part 2 of my paper presented to the NAC Historical Society on the movement of Methodist hymnody in the United States. I've learned some amazing things about the creative tensions of the past that could guide us into the future.

Pictured is a leaf from a Renaissance period hymnal, text in Latin.

Creative Tension Prior to Methodism

In order to understand how this creative tension between the "mysterious and liturgical" and the "vernacular and evangelical" plays itself out in congregational song, we should briefly trace this tension through many centuries of worship prior to Methodism. The Wesley brothers did not invent hymns. The word “hymn” comes from ancient Greek hymnos. Hymns are older than Christianity itself, not only as songs to pagan gods and leaders, but as songs found on the lips of Old Testament characters such as Moses, Deborah, and Hannah. In the New Testament, Luke records hymns, known as canticles, around the Christmas story and Paul quotes them in the epistles. Heart-felt hymns on the one hand, along with the Hebrew Psalter on the other, became the basis for the early church’s singing and set in motion this grand pendulum.

In early centuries of Christianity, creative tensions between vernacular hymn singing on the one hand, and stricter adherence to scripture on the other, evolved. A rich tradition of psalm singing developed, with Gregorian chant becoming dominant with new modes and ordering of music. By the fourth and fifth centuries, conservative monastics frowned on singing anything except psalms. The Council of Braga in Spain (561) forbade the use of hymnals!

But plainsong hymns swung back into the mix due to the influence of Benedict in the 6th century. Vernacular hymns in Greek had thrived previously in Jerusalem and Bethlehem despite rejection. Ambrose came along and founded the tradition of Latin hymnody, adopted by Benedict in his orders of worship. These two essential schools of singing, metrical psalmody and plainsong hymns, continued in creative tension.

Centuries later, the German reformation came, and reformers were prolific in Protestant hymnody beginning with Luther’s own hand (e.g. “A Mighty Fortress is Our God”). He was not only a radical leader but a fine musician with a deep knowledge of German folk song. A number of great composers of German chorales followed. Common people loved the music because it was familiar and easier to sing than Gregorian chant, and the texts were in vernacular, common language. The dawn of the printing press gave common folks access to these hymns. The hymnal was officially born, though prior to this music leaves from the Renaissance period approximated the look of the hymn setting.

It is very important for Methodists to understand that before the Wesleys came along, German hymnody was blossoming, but English singing had been losing its appeal to the average person. Plainsong hymns did have some history in England, due in part to Thomas Tallis, who is well known for such writings as “Tallis’ Canon”. But their influence had declined sharply due to the strife between Calvinists and Armenians (the very struggle in the British landscape that gave birth to the derogatory term “Methodist”, used by Calvinists against Armenians). Calvin taught that congregational song must be scriptural, and the pendulum had been swinging toward metrical psalmody. In 1535, Myles Cloverdale published Goostly Psalmes and Scriptural Songes which included translations of German texts. In 1546, it was condemned heretical. For the next 150 years, singing in England was almost exclusively metrical psalms.

Isaac Watts, a “dissenter” just a little older than the Wesleys but still their contemporary, had begun the wave of bringing vernacular hymns back (e.g. “O God Our Help in Ages Past”). He used tunes were meant to be easily sung upon first hearing after a leader “lined them out,” as easily illustrated with his “When I Survey the Wondrous Cross.” The English evangelical hymn had been reborn just before the Wesleys came onto the scene, and the stage was set.